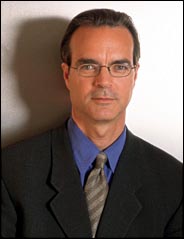 August 1, 2006, Greencastle, Ind. - "They call this a 'good' earnings season? I'd hate to see a bad one," writes James B. Stewart, editor-at-large of SmartMoney and 1973 graduate of DePauw University, in his "Common Sense" column at the magazine's Web site today. "Last week I discussed Yahoo (YHOO), which was slammed after it met earnings expectations but delayed the introduction of its revenue-enhancing search upgrade. I thought the ensuing 20% plunge was an overreaction, an anomaly. It turns out it was just a warm-up for at least a week's worth of punishment."

Stewart, best-selling author of DisneyWar and Den of Thieves and chair of DePauw's Board of Trustees, won a Pulitzer Prize for his work as front page editor of the Wall Street Journal. He declares, "Usually I like to watch the ticker while jogging on a treadmill, but last week it seemed every time I looked up I had to cringe. Instead of relatively minor moves, there was one crushing blow after another to stocks I own, have owned, or was thinking of buying. I could tell who had just

James B. Stewart recently won the Loeb Award, the highest honor in business journalism. Learn more in this previous story.