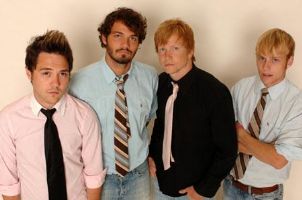 October 1, 2006, Greencastle, Ind. - The Greencastle-based band TGL -- which includes DePauw University students Will Cath (drums) and John Sibbitt (guitar and vocals) -- is hoping an Internet will increase its fan base. A story in the Banner-Graphic describes how TGL (short for "The Good Life") "has plans to enter a video contest YouTube.com is sponsoring in conjunction with Cingular Wireless." Winners will be announced in four different categories and, among the prizes, will appear on ABC's Good Morning America. (photo at left by Andrew Hanson '06)

TGL has re-shot a video for

its song, "Blue Star Highway," in high definition for the contest. Jason Moon writes, "The video was originally produced by former DePauw University student Brandon Dawson and directed by [2004 DePauw] graduate [Michael] McIraith '04." The article adds that Brian Goad '02, edited and produced the video. McIlraith and Goad served in similar roles when the original clip was made.

Access the complete article at the Banner-Graphic's Web site.

TGL opened for Jack's Mannequin in an April 5, 2006 concert at DePauw's Lilly Center.

Read more about Brian Goad and Michael McIraith in this previous story.