October 16, 2006, Greencastle, Ind. - A new exhibit created by the Children's Museum of Indianapolis and the National Geographic Society, which opened Saturday, received an assist from the geographic information systems (GIS) specialist at DePauw University. Beth Wilkerson served as a GIS consultant for "National Geographic MAPS: Tools for Adventure," which will remain on display at the Children's Museum through February 11, 2007, then embark on an extensive world tour.

"National Geographic MAPS" allows children and their families to learn about and experience the dynamic world of maps. In her role as GIS consultant, Wilkerson provided technical support and assistance for the exhibit’s interactive station that introduces visitors to the concepts of geographic information systems while teaching them about 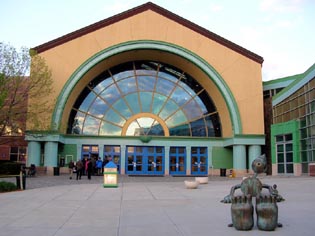 "We at the Children’s Museum of Indianapolis are very grateful to Beth and to DePauw University for lending her time and expertise to our project," says Tricia O’Connor, who developed the exhibit.

"Studies have shown that geographic literacy in America is astonishingly low, though good geographic skills are necessary to understand global events and world cultures," notes Dr. Jeffrey H. Patchen, president and CEO of the Children’s Museum of Indianapolis. "Thanks to the National Geographic Society and its experts, children and families will be able to learn about 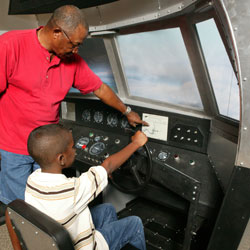 and experience maps in this remarkable new exhibit."

"In this era when we see ‘global positioning’ in everything from cars to spacecraft, an understanding of geography becomes more and more important," adds William M. Goodwin, vice president for community development for Lilly Endowment, which provided $1.4 million in support to the project. "This exciting collaborative venture will showcase maps from the distant past to maps of the future. The project will help us all -- not just children -- become more savvy about a world in which events in far-off places seem to affect us immediately."

and South America and Europe, reaching an estimated 4 million children and their families.

An Indianapolis Star article reports, "Cathy Donnelly, the museum's point person on the exhibit's development, says the exhibition stresses how many types of maps there are, including Braille maps, sound maps and a Polynesian map made of sticks and shells. There's also a section on the use of global positioning satellites and other technologies. 'Maps are tools to help expand our thinking about the world,' said Donnelly."