November 16, 2006, Greencastle, Ind. - "We are very excited to reach this agreement to acquire Reader's Digest, a truly wonderful company with a broad array of global assets and growth businesses that are extending a rich heritage," says Timothy C. Collins, CEO of Ripplewood Holdings LLC and a 1978 graduate of DePauw University. This morning, Ripplewood -- a leading private equity firm established by Collins in 1995 -- announced that it will acquire the Reader's Digest Association, Inc. for about $1.61 billion in cash. Including the assumption of debt, the deal is valued at $2.4 billion.

"Together with our portfolio companies, Direct Holdings and WRC Media, Reader's Digest will enjoy the benefits of a diversified, multi-channel publishing platform," Collins adds. 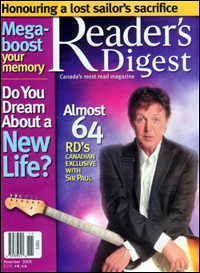 agreement and recommended that Reader's Digest's stockholders adopt the agreement.

The Association's flagship magazine, Reader's Digest, is published in 50 editions and 21 languages with a monthly circulation of approximately 18 million and a global readership of approximately 80 million. The company reaches millions of consumers through more than 20 other magazines and online portals, including Every Day with Rachael Ray, Allrecipes.com, and Taste of Home, America's best-selling food and cooking magazine. Reader's Digest's products are organized around four key affinities: food, home and garden, health, and English as a second language. For the fiscal year ending June 30, 2006, the company generated revenue of approximately $2.4 billion.

Tim Collins received an honorary doctorate from DePauw on May 22, 2005.  Video of the presentation is embedded below.