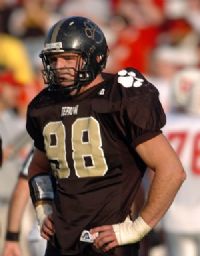 April 30, 2007, Greencastle, Ind. - DePauw senior Dustin Hertel, who earned All-American honors for his play as a defensive end on the Tiger football team, has been invited to the Cleveland Browns rookie camp. Hertel will travel to the National Football League's practice facility in Berea, Ohio for the camp, which begins this Thursday and continues through Sunday.