May 16, 2007, Greencastle, Ind. - "Dan Quayle has a lot to do with the deal that's set to make Chrysler an American company again," writes the Indianapolis Star's John Ketzenberger. "Quayle is chairman of global investments for Cerberus Capital Management, which agreed Monday to pay German automaker Daimler $7.4 billion for an 80.1 percent stake of Chrysler. Four years ago, Quayle founded an office in Frankfurt, Germany, for Cerberus, a $24 billion private equity firm that's 15 years old. Quayle now lives in Phoenix, but remains a fixture in Indiana, which elected him to Congress and the Senate," notes the business columnist.

"Dan moved from politics to the business world without missing a beat," says William Neale, a partner at Krieg DeVault who keeps in touch with the former vice president. "He's a very savvy businessman." 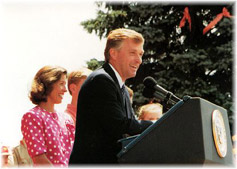 A 1969 graduate of DePauw University, Dan Quayle "is only underestimated by a few," adds Dan Evans, the chairman of Clarian Health who ran campaigns for Quayle. "Most have learned he is a force to be reckoned with, especially on international deals."