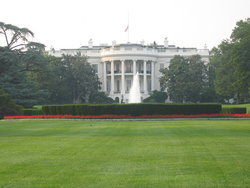 An announcement from the White House notes that James was also executive director of the Missouri Republican Party - Victory 2002, and that he received his bachelor's degree from DePauw.