August 1, 2007, Greencastle, Ind. - A three-day forum this fall, "DePauw Discourse 2007: Sustainability and Global Citizenship," will provide members of the University community with opportunities to engage in thought-provoking discussion about pressing global environmental challenges. Set for October 4-6, DePauw Discourse lectures, which are presented by the Washington C. DePauw Society, are free and open to all.

The keynote address for DePauw Discourse, as previously announced, will be provided by Robert F. Kennedy Jr. Other sessions will feature the following individuals:

DePauw University faculty members who will be participating are:

"As we look forward to the fourth annual DePauw Discourse, this year's distinctive emphasis on sustainability and environmental challenges will provide a timely opportunity for the DePauw community to engage prominent leaders and thinkers regarding

some of the world's most important issues." says Joyce Taglauer Green `75, chair of DePauw Discourse. "Our tradition of thought-provoking discourse continues to build and will actually include new forms this year as we screen a provocative documentary film and focus on high quality photography that tells a powerful story of conservation."

DePauw Discourse 2007 will begin October 4 at 4 p.m. with an opening lecture by Bill McKibben (pictured at right). McKibben's first book, The End of Nature is regarded as the first to address the issue of climate change to a general audience, and has been printed in more than 20 languages. His most recent book, Deep Economy: the Wealth of Communities and the Durable Future, advocates for new approaches to consumption in an age of global warming. He proposes "pursuing prosperity in a more local direction, with cities, suburbs, and regions producing more of their own food, generating more of their own energy, and even creating more of their own culture and

At 8 p.m. on October 4, The 11th Hour, the new environmental documentary produced and narrated by Leonardo DiCaprio, will be the focus of a special screening and discussion with Discourse participants Bill McKibben, Greg Watson, and Wallace J. Nichols '89, all three of whom are featured in the film. Professor Jennifer Everett will moderate the session. The documentary examines the state of the global environment, and includes visionary and practical solutions for restoring the planet's beleaguered ecosystems.

Tickets will be required at the screening.

An October 5 Discourse luncheon will feature Andy Miller, director of the Indiana Department of Agriculture, who will speak on "The Truth about Sustainable Agriculture" (reservations are required for lunch). Under Miller's leadership last year, Indiana saw $2.68 billion invested in food and agriculture projects in the state, bringing 2,518 jobs to Hoosiers. Miller has also worked to establish Indiana as a national leader in biofuels. Prior to his current role, Andy worked for Weaver Popcorn, ConAgra, Nabisco, and Procter & Gamble, in addition to creating Nature's Entree, a frozen food company in

Greg Watson and Kay Pashos will discuss alternative energy sources with DePauw assistant professor of economics and management, Michele Villinski. Watson is vice president for sustainable development and renewable technologies for the Massachusetts Technology Collaborative. Having

worked closely with the U.S. Department of Energy and General Electric, he is a leader of the Offshore Wind Collaborative.

Kay Pashos is vice president of regulatory strategy for Duke Energy, one of the largest electric power companies in the United States. Pashos has served as president of Duke Energy Indiana and is currently on the board of directors of the Indiana Energy Association.

Glenn Prickett, Conservation International senior vice president for business and U.S. government relations, will hold a discussion with Kerry Pannell, DePauw University associate professor of economics and management. They will explore what government and business can and should be doing to engage global environmental problems, including issues of climate change, biodiversity, water, and energy security. Prickett is the executive director of Conservation International's Center for Environmental Leadership in Business.

Cristina Mittermeier, executive director of the International League of Conservation Photographers, will discuss

her recent work with Conservation International that uses high quality imagery as an effective story-telling conservation tool. A marine biologist by training, Mittermeier turned to photography out of the need to communicate with a larger audience and to portray the link between people and their environment. In the last decade, she has co-edited eight books and her photos have been featured in major magazines throughout the world.

Friday evening will conclude with 8 p.m. remarks by Robert F. 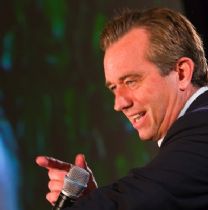 Kennedy, Jr., entitled "A Contract With Our Future.: To read more about the environmentalist, attorney, and author, view this previous article.

For more information on "DePauw Discourse 2007: Sustainability and Global Citizenship," visit the event's official Web site or contact Steve Setchell '96, assistant to the vice president for development and alumni relations and director of the Annual Fund, at ssetchell@depauw.edu.