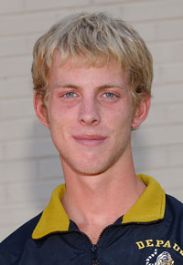 The article cites Bretscher's DePauw degree and that he was a member of the University's cross country team. "Bretscher’s swim took 21:11 to finish, while he biked the 24.8 mile course in 57:37. The running portion took him 35:02 to complete. Bretscher said a key for him when competing in the run portion of the triathlon, the last event, is to just stay calm."

“It’s easy to get excited and just take off way too hard,” the

24-year-old tells the newspaper. “So I just try to relax and go really. I let the run come to me.”

Read the complete story at the Journal-Register's Web site.