November 7, 2007, Greencastle, Ind. - "A group of retired soldiers hopes to revive the name of a Hoosier war hero by naming Indianapolis' airport for him -- again," reports the Indianapolis Star in a story on H. Weir Cook, a member of DePauw University's Class of 1916. The Indianapolis airport was named Weir Cook Municipal Airport in honor of the World War I pilot who died the previous year. In 1976, it was renamed in Indianapolis International Airport. With a new airport under construction, there's a move afoot to return Cook's name to the facility.

"Weir Cook was a hero, and we need to elevate our heroes," says Joe Ryan, president of the Military Officers Association of America, Indiana Council of Chapters. Will Higgins writes, "Ryan, a 76-year-old retired Army colonel, and other retired officers have gathered nearly 1,000 signatures at VFW halls across the state and plan to take their case to city officials later this year."

The story notes, "H. Weir Cook, born in Hancock County in 1892, was an aviator who shot down seven German planes during World War I. He was middle-aged when World War II broke out, but he volunteered and was killed in a plane crash near an air base in New Caledonia 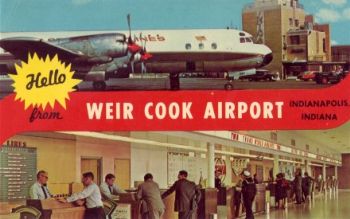 in 1943. The next year, Indianapolis named its airport for him."

In 1976, when Indianapolis unveiled a new airport, the name disappeared. "With the nation still hung over from Vietnam, deep-sixing a war hero's memory created little controversy," Higgins reports. "Ryan said he hopes the time is ripe to bring Cook's name back: Post 9/11, he said, Americans are more patriotic, united in support of the troops, if not the war. And the airport is in flux, in the late stages of a $1 billion makeover."

Read the complete text at the Star's Web site.

Learn more about Harvey Weir Cook in this previous story.