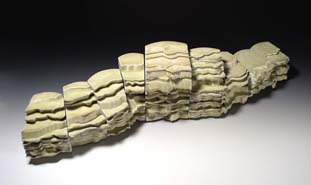 January 24, 2008, Greencastle, Ind. - "Jeff Schmuki: Pattern Recognition," an exhibition featuring sculptural ceramic works and installations that explore the relationship between cartography, documentary, memory and the natural/manmade landscape, will be on view at the Richard E. Peeler Art Center at DePauw University from January 30 through March 2, 2008. The artist will be on hand for an opening reception and slide talk on Wednesday, February 6, at 4 p.m. (at left: Yellow Landscape, 2006; glazed porcelain, courtesy of the artist)

If the essence of the natural landscape could be contained within a smaller three-dimensional form, how would it look? Often when man tries to contain the physical landscape there is a loss of its fundamental 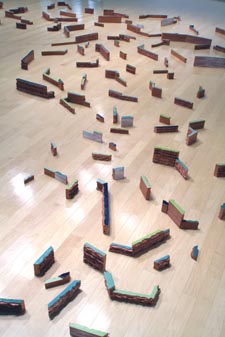 nature within the restrictions of the two-dimensional -- maps, photographs, paintings. Jeff Schmuki’s work creates representations of the land, but goes beyond the flat surface into a realm beyond the common. (at right: Yellow Landscape, 2006; glazed porcelain, courtesy of the artist)

Schmuki produces simple and repetitive geometric forms in order to construct his ceramic sculptures and installations. His work is strongly reminiscent of forms and patterns found in the natural landscape, and with titles such as Plats and Elevations, the essence of cartography is examined within Schmuki’s work as well. Through the use of repeated forms he creates multiple layers that interact with light and perspective; the abstract organic quality of these forms create something uncommon and unique out of that which is familiar -- the land.

Schmuki says, "by translating my experience of the landscape into a sculptural understanding, place becomes space, and the experiential becomes conceptual."

Jeff Schmuki received his B.F.A. in Studio Art from Northern Arizona University in 1993 and his M.F.A. in Ceramics from Alfred University’s New York State College of Ceramics in 1998. Since then he has had several teaching and residency appointments, and has exhibited throughout the United States. His work 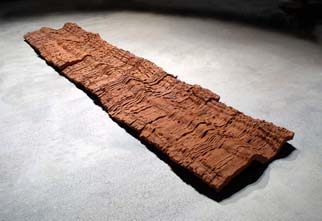 is part of a number of collections, including the Smithsonian Institution; the Arizona State University Ceramic Research Center in Tempe, Arizona; Shepparton Art Gallery in Victoria, Australia; and the Mississippi Museum of Art in Jackson, Mississippi. (at left: Ribbon, 2006; earthenware, courtesy of the artist)

In 2005 Schmuki received an honorable mention at the 3rd International World Ceramic Biennale (CEBIKO) in South Korea. He has also been the recipient of a number of grants from prestigious institutions, including the Andy Warhol Foundation, the Pollock-Krasner Foundation, the American Academy of Arts and Letters, and the Joan Mitchell Foundation. He is currently visiting

associate professor of ceramics at DePauw University in Greencastle, Indiana, where he lives and works.

The galleries at the Richard E. Peeler Art Center are open Tuesday through Friday from 10 a.m. to 4 p.m.; Saturday 11 a.m. - 5 p.m.; and Sunday 1 – 5 p.m., and are closed during University breaks and holidays. For more information, visit the Peeler Center online.