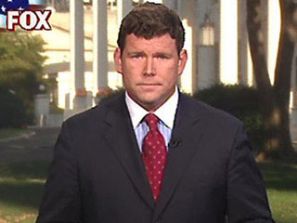 September 25, 2008, Greencastle, Ind. - "I just got back from Iraq and it has changed dramatically since the first time I was there," Bret Baier, chief White House correspondent for FOX News Channel, told the Economic Club of West Michigan Tuesday night. Added the 1992 DePauw University graduate, who has made thirteen trips to Iraq, "When I first was there, there were about 190 attacks per day and it's down to 15-20 attacks per day." 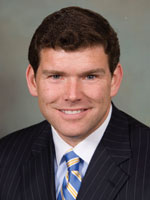 Afghanistan 11 times since September 11, 2001. Melissa McGuire reports, "He began his career at FOX during the network's beginning, with just a cell phone and a fax machine, and has moved up the chain from a job as national security correspondent to chief White House correspondent."

Of the nation's economy, Baier told the gathering, "It is important for people in Capitol Hill to understand what's going on before the people on the street can understand what is going on. There are lawmakers out there that don't know how to define what they are doing."

Baier's other observations include -- in McGuire's words "that much of the decision in the election will come from what happens at the first debate between Barack Obama and John McCain, and then again when Sarah Palin and Joe Biden go head-to-head," and "He said sometime in the next 20 years there will probably be a small working democracy in Iraq."

The article states, "Baier is a graduate of DePauw University with a bachelor's degree in political science and English. He began his career as a production assistant at CNN and joined FOX News Channel in 1998. He has 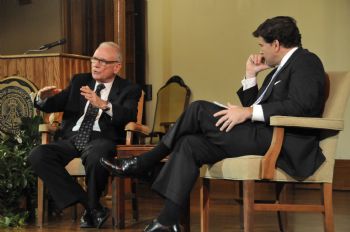 secured numerous exclusive interviews with government officials, including interviews with Secretary of Defense Donald Rumsfeld and Chairman of the Joint Chiefs of Staff Peter Pace. Baier broke stories tied to the war on terror including the revelation that Osama bin Laden was communicating with top al Qaida terrorist Abu Mussab al Zarqawi and the confirmation that a U.S. airstrike killed Zarqawi inside Iraq."

Bret Baier returned to his alma mater last week for DePauw Discourse 2008: America's Role in the World, and moderated a session with Lee Hamilton '52, the former congressman and co-chair of the Iraq Study Group and 9/11 Commission. A story -- including video and audio clips -- can be accessed here.

Learn more about Baier in this previous article.