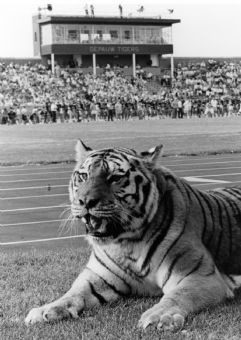 September 26, 2008, Greencastle, Ind. - "It's going to be a fun one," DePauw University head football coach Matt Walker says of tomorrow's Family Weekend matchup with Southern Collegiate Athletic Conference foe the University of the South (Sewanee). "They're playing with a lot of confidence," Walker tells the Banner-Graphic of the visitors from the south.

Kickoff is at 1 p.m. at Blackstock Stadium and admission is free. Like all DePauw football games, the contest can be heard live on student radio station WGRE (91.5 FM or via this link). 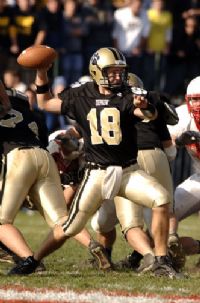 "DePauw (2-0, 1-0 SCAC) has faced two spread offenses in the first two weeks of the season, but this week they face a more traditional run-first kind of offense," writes Jared Jernagan. "This kind of game could suit the Tigers well, as they rank No. 4 in the country against the run." His story adds, "The Sewanee (2-1, 1-0 SCAC) ground game is led by Trey Reliford, who averages 92.0 yards per game and has three touchdowns on the year. As a team, they run for 161.3 yards per game."

"They're a true running team," Walker, a 1999 graduate of DePauw, says of Sewanee.

DePauw is coming off a 27-14 win at Centre College last Saturday, where Walker saw improvement over the Tigers 52-17 win versus Anderson University. "They played a lot better and got back to playing the way we like

to play -- physical," says the coach. "We ran the ball much better and more consistent play our of the entire unit. That is a veteran group of guys who we really trust and who I have complete confidence in."

Read more at the newspaper's Web site or access another game preview by clicking here.

For the very latest on the football program, visit the team online.