International humanitarian leaders will travel to DePauw University in March to participate in the Humanitarian Intervention Symposium, hosted by the Janet Prindle Institute for Ethics in collaboration with the West Africa Regional Bureau of the United Nations Office for the Coordination of Humanitarian Affairs (OCHA).

Two days of panel discussions will follow a March 5 keynote address by former Australian Foreign Minister Gareth Evans. Evans (pictured left) served as co-chair for the International Commission on Intervention and State Sovereignty, which produced the report, The Responsibility to Protect, that frames the symposium's topic, "Imperfect Duties? Humanitarian Intervention in Africa and the Responsibility to Protect in a Post-Iraq Era."

DePauw's location in the heartland of America makes the university an appropriate site to discuss how to use our nation's power abroad, believes Associate Professor of Political Science Brett R. O'Bannon, the symposium's organizer.

"I wrote in a letter to Evans about why he should come all this way to Indiana to debate the Responsibility to Protect doctrine. My argument was, from the foreign policy perspective, the heartland matters a great deal," O'Bannon says. "Immediately following the end of World War II, Winston Churchill made his famous Iron Curtain speech at a small liberal arts college in Missouri. I think the reason he did so was because he understood that, as a question of American foreign policy, those issues can be decided out here. We not only need to be having these conversations in cities like New York and Washington D.C., but in places like Greencastle as well."

The symposium grew out of a conversation in Dakar, Senegal between O'Bannon and Hervé Ludovic de Lys, head of office for OCHA's West Africa Bureau. Following a presentation by O'Bannon to the OCHA staff, de Lys approached him to discuss the possibility of a future collaboration between his organization and DePauw—an idea that O'Bannon developed into a discussion of the ethics and legality of military intervention in humanitarian emergencies.

"The question of humanitarian intervention is much more complicated than we think," says O'Bannon. "The desire to end genocide in Darfur, for example, is a pretty bipartisan, non-political issue. It's a surprisingly complicated issue, however. 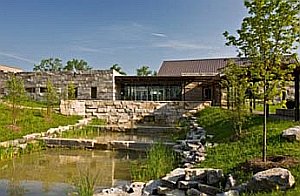 With help from fellow faculty members Sharon M. Crary, assistant professor of chemistry and biochemistry, and John K. Roth, 2007-08 Robert and Carolyn Frederick Distinguished Visiting Professor of Ethics, O'Bannon has organized an impressive group of participants who represent institutions of scholarship, international policy and government from around the world.

Among the attendees scheduled to participate are Karen Koning AbuZayd ‘63, commissioner-general of the United Nations Relief and Works Agency for Palestine Refugees in the Near East; Catherine Dumait-Harper, board member for the Global Policy Forum and former U.N. representative of Médecins Sans Frontièrs (Doctors Without Borders); Jerry Fowler, executive director of the Save Darfur Foundation; Anne Orford, professor and director of the Institute for International Law and the Humanities at Melbourne University, Australia; and Amos Sawyer, former president of the interim government of Liberia.

Although many of the participants are outspoken critics of foreign intervention, O'Bannon points out that people on both sides of the debate share a common mission. "Even those who are suspicious of military intervention are doing work in areas such as human rights law," says O'Bannon. "Critics of the Responsibility to Protect doctrine are just as committed to finding solutions to the problem of genocide."

The Humanitarian Intervention Symposium is open to all faculty members, students and staff of DePauw. Visitors to the University must register for the event at the Symposium's Web site, where more information, including a complete list of participants, can be found.