Cath Calling this Season His Last at DePauw 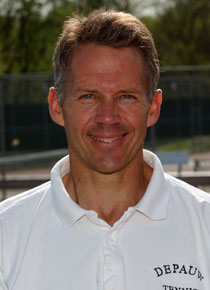 February 20, 2009, Greencastle, Ind. — Tonight not only marks the opening of the spring portion of the DePauw men's tennis schedule, but it's also the beginning of head coach Tom Cath's final season as the Tigers' head coach.

The 18th-ranked Tigers host Division II University of Southern Indiana at 5:30 p.m. this evening in the DePauw Indoor Tennis and Track Center.

Cath, a 1976 DePauw graduate who also serves as his alma mater's Director of Career Services, has announced his departure from the University later this spring when he will take a position as the director of Valparaiso University's Career Center.

In his 24th season, Cath is the program's winningest coach with a 352-161 record including 22 winning seasons. The Intercollegiate Tennis Association NCAA Division III Coach of the Year in 1995 and 2005 and three-time ITA regional coach of the year has directed the Tigers to 14 NCAA Division III Championship team appearances including 10 straight.

His teams advanced to the national quarterfinal round in 1990, 2000, 2006 and 2007. Additionally, the Tigers have been represented at the NCAA Championships by a team or individual in 20 of his 23 seasons. 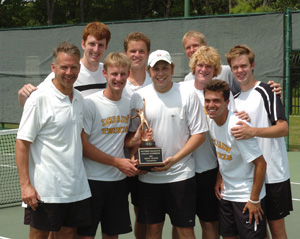 Cath has led DePauw to Southern Collegiate Athletic Conference championships each of the last two seasons (2007 champions pictured right) and has earned the league's coach of the year honor five times in the Tigers' 10 seasons in the conference.

Prior to that he directed DePauw teams to all 10 Indiana Collegiate Athletic Conference championships and was the conference's coach of the year nine times.

A four-year letterman for the Tigers, Cath played number one doubles all four years and held the top singles spot for his junior and senior campaigns. He competed at the 1976 Division III Championships in both singles and doubles.

Cath and his wife, Allison, are the parents of three sons.