The Life of Gertrude Hendrix '26

Gertrude Hendrix knew from the time she was six years old that she wanted to be a mathematics teacher. However, when she arrived at DePauw University she was dismayed to hear that the head of the mathematics department was very skeptical about women in mathematics. Years later, she recalled her reaction, “I’ve never been one to be deterred from doing anything I thought I could do simply because of the accident of having been born a girl, so I went ahead.” She graduated Phi Beta Kappa in 1926 with a major in mathematics and a minor in physics.

During her career as a professor at Eastern Illinois University, Hendrix had her first opportunity to learn to ride horses. Riding, raising and studying horses became as important to her as teaching and learning mathematics. These two passions became intimately connected in her life’s major research interest, which she once described as the study of “the nature of unverbalized awareness traced from primitive animal learning to abstract human thought.”

Cynthia Noel Rolf ’79 wrote an extensive oral history and a biography of Hendrix for her senior thesis titled Back Home in Indiana. Noel describes Hendrix’s work with horses and the complex and subtle notion of unverbalized awareness.

Noel writes that unverbalized awareness “is a principle most practically applied in horses and horse training, but theoretically most easily demonstrated in mathematics and explained in all its detail with the aid of formal logic. Traditionally language is explained as an integral part of thought. The two functions were believed to go hand in hand, without thought, no language and without language, no thought, so closely related as to remain inseparable. But, from her experiences as a teacher and from training horses, Miss Hendrix became convinced that language and thought function separately. She believed that one could be unable to verbally articulate an idea, and nevertheless be capable of knowing and using it. Thoughts need not be inseparable from the words that describe them. She called this phenomenon ‘unverbalized awareness.’

“And beginning in 1937, when she first became conscious of such unverbalized awareness, she began to exploit the principle and made efforts to implement it in her teaching, because she discovered that students often responded better on the unverbal level. She continued to develop and refine her methods for the next nine years. In 1946 while doing advanced work at the University of Chicago, she did experiments which offered proof of the existence of unverbalized awareness and provided the opportunity to make some conclusions about its nature,” writes Noel.

Those experiments, which were carried out during a sabbatical leave in 1946-47, led to Hendrix’s first publication about unverbalized awareness – “A New Clue to Transfer of Training,” which appeared in a national education journal in 1947.

For 26 years at Eastern Illinois University, Hendrix taught courses, trained teachers, conducted research and served in leadership roles in various professional organizations. By the time Max Beberman, then director of the University of Illinois Committee on School Mathematics (UICSM), asked her to join the UICSM group as a senior member, she had a firmly established professional reputation. She later said, “Believe me, that decision was an upheaval, but I knew it was the most significant thing in school mathematics that had come along in my lifetime, and I was thrilled to join the staff.”

Beberman, in his 1958 Inglis Lecture at Harvard University, described the UICSM new math as being built on two principles – discovery and precision of language. In discussing the notion of discovery, he suggested that the intellectual foundation of the UICSM discovery method, and “what differentiates it from other methods which are also called discovery methods” is the application of the fundamental notion of unverbalized awareness. In fact, the only reference cited in the entire section of the lecture on discovery is Hendrix’s 1947 paper.

Shortly after being asked to join the UICSM project, she was invited to join the staff of another new math project that was being started at the University of Maryland. She replied that she was committed to the UICSM, but in the course of their conversation the subject of her work with horses arose. He said that he knew someone who would be very interested in this and arranged an introduction to this person, Margaret Mead. (The meeting between Mead (below right) and Hendrix (below left) in 1956 was their first. Although Mead spent a year as a student at DePauw, it was before Hendrix’s time at the University.)

Mead took an interest in Hendrix’s work and sought to assist in finding support for her research, but she did not succeed in securing the major funding necessary. Some years later, however, Mead was instrumental in helping produce a film record of the early handling sequence Hendrix used with her foals. Using these and other materials, Hendrix was able to present some of her research on horses at the 1966 meeting of The American Association for the Advancement of Science. She recalled to Noel that, “It was part film, part lecture by me and an introduction from Margaret Mead.”

Gertrude Hendrix spent 10 years with the UICSM project working with teachers, experimenting with curriculum, conducting training institutes and lecturing throughout the country. In addition, she was designer and content director for 50 teacher-training films, a project for which Mead served as a consultant. Even with all of these responsibilities, she continued her research involving unverbalized awareness and the nature of language and communication.

When she left Illinois, she returned to property in Putnamville, Ind., that had been in her family since 1829. Named by her for the seven streams found on the once larger holdings, Polycreek Farm became her home, and the letterhead of her stationery told you it dealt in hardwood timber, Black Angus cattle and American Saddlebred Horses.

Hendrix remained involved in mathematics education by serving as a consultant to the UICSM, DePauw mathematics department and Greencastle Schools. She also continued her research and produced a major paper, which she presented at an international symposium in Austria sponsored by the Wenner-Gren Foundation for Anthropological Research. The presentations and discussions at the conference are the subject of Mary Catherine Bateson’s book, Our Own Metaphor. Bateson is a writer and cultural anthropologist, currently a visiting professor at Boston College’s Center on Aging and Work, and she is the daughter of Margaret Mead.

Hendrix’s written legacy includes more than 20 mathematical articles, the first appearing in 1932, and several pieces dealing with horsemanship and training, and two books. The first book was her 1937 geometry textbook and the other is a monograph, Nature of Language, which was published in 1988. 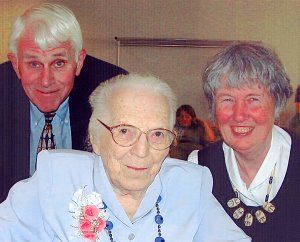 She was included in several editions of Leaders in American Science, was chosen for The Distinguished Life Achievement Award from The Illinois Council of Teachers of Mathematics and received an Alumni Citation from DePauw.

She was never listed in Who’s Who of American Women. However, she was asked several times, and her reply to one request was, “I do not wish recognition from any agency which classifies human beings into men and women before it classifies them according to achievement. The implication of Who’s Who of American Women is that a woman must not be expected to do as much as a man to achieve distinction. I find this degrading, almost insulting, and I have never comprehended why all self-respecting women do not feel the same way.”

Gertrude Hendrix lived at The Asbury Towers Retirement Center in Greencastle, Ind., for many years. The party to celebrate her 100th birthday was held there on May 24, 2005. She died on December 26, 2008 at the age of 103.

This story is credited to John E. Morrill ’57, professor emeritus of mathematics and economics. Seen in photo above with his wife, Whitney Fearer Morrill ’59, and Gertrude Hendrix at her 100th birthday celebration.