When Associate Professor of Asian Studies Sherry J. Mou came to DePauw in 2002, Chinese culture was still relatively unknown to most Westerners. Since then, much has changed.

China's continued transition to an open economy has raised its Gross Domestic Product at a rate greater than any nation in the world, and in November 2008 China overtook Japan as the United States' largest debt holder. A record American television audience watched Chinese athletes win 51 gold medals at the Beijing 2008 Olympic Games, which began with an unforgettable ceremony that demonstrated China's seriousness in promoting its image worldwide. Now, students come to Mou with hopes of getting a spot in one of her classes on Chinese culture.

"I get asked, when is your class? How can I get in?" Mou says. "Young people now immediately understand China's importance in their daily lives, and they want to learn more about the country."

Mou, who is originally from Taiwan, has researched thousands of years of Chinese biographies and literature to examine the development of Chinese society, particularly the impact of Confucianism on the lives of women. Confucius, a Chinese philosopher who lived in the 6th century BCE, developed a system of ethics and social responsibilities that, even after China's communist revolution of the 1940s, continues to guide the Chinese people. 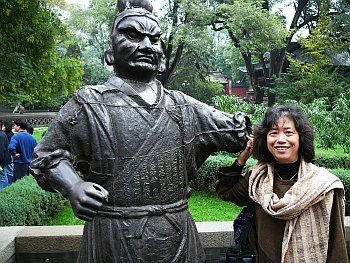 Mou believes that its teachings also provided women with a great deal of power in a society governed by men.

"China is still very much Confucian, and the family is the basic unit of a Confucian society," Mou says. "The mother is very important because she deals with the family's daily problems while the father is away. This role is held in high regard in Confucianism, which places great emphasis on this world and the day-to-day activities of people.

"I think there was always an undercurrent of female influence that wasn't apparent to non-Confucian societies. Looking at Chinese literature from the outside, Western scholars typically don't see women, but women played very strong roles in the family and household, and therefore society. For example, in pre-modern China, when a father would pass away, the son would return to mourn him for three years. But it was the mother who could say, ‘All right, you've mourned enough, time to go back to your work.' A mother has a big say in many of these cultural elements. If you don't see these elements because in your culture they aren't as important, then women don't seem important either."

Outside of the family, Chinese women have been romanticized for a millennium by male authors, but not in the way you might think. A genre of literature first seen in the 10th century CE has followed the lady knight-errant, a wandering female warrior who travels the land in search of justice. While researching this literary tradition, Mou found that the characters the stories depict are very much based on historical fact. Three thousand years ago, a woman named Fu Hao commanded an army of thousands, making her the most powerful Chinese military leader of her time, male or female. While teaching at Wellesley College, Mou was guest editor of the Winter 2001-2002 issue of Chinese Studies in History, titled Women Warriors in China, which documents Fu Hao and many other prominent female warriors in Chinese history.

The story of the lady knight-errant has continued in films such as King Hu's Come Drink With Me, and spread to American theatres with Ang Lee's Crouching Tiger, Hidden Dragon and Quentin Tarantino's Kill Bill series, which pays homage to Hong Kong's Shaw Brothers film studio. While working on a book about traditionalism in Chinese film, Mou discovered a new female role that she believes is a combination of the Confucian mother and the lady knight in these films.

"It's interesting because the two seem to be contradictory," Mou says, "with one being a roaming seeker of justice, alone and independent with a sharp sense of justice, and the other being maternal and rooted with her family. In past films, they seem to be opposites. I think this character was created because of the growing market economy that has been practiced in China for the past two decades. New kinds of crimes became rampant, similar to what has happened on Wall Street, where wrongs have been done before there are laws against those practices. This character is a creation to deal with these wrongs on screen for a frustrated audience."

While much of her research is now focused on China's modern culture, Mou insists that the country's past holds the key to understanding its current affairs.

"Studying China is no different than studying the United States. If you truly want to understand China, you have to understand its history or you will misread modern events. I try to pull out parts of the country's tradition to help students understand modern China. More than that, I want students to understand the relationship China has with America," Mou says.