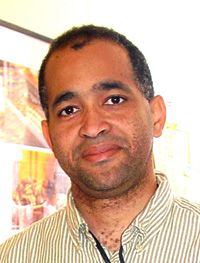 "I find little spaces in time to be creative. It's an oasis ... a more complete kind of work."

Assistant Professor of Biology Pascal J.E. Lafontant finds solace after a long day of molecular lab research when he immerses himself in poetry that moves the soul. Among his favorite writers – Stephen Dunn, Stanley Kunitz and French surrealist Paul Eluard – Lafontant finds inspiration for his own work.

Because he began his academic career in art and theatre, he has made his creation of art more than simply a hobby. Lafontant switched to a career in science in college, studying biomedical engineering and earning a Ph.D. degree in biomedical science from Baylor College of Medicine. But despite years of achievement as a researcher and professor, he remains faithful to his creative side.

"It's an odd thing," he reflects. "When I'm with other scientists, I don't mention my poetry writing. But when I'm with my literary friends, they don't see me as a scientist."

Lafontant is particularly drawn to poetry of Africa, the Congo, Senegal, and from his home in Miragoane, Haiti. When he was 17, his first poem was published in a Haitian anthology of Creole poetry. He would never have known that some of his poetry was published if it weren't for his work as a professor.

"I was speaking with a professor at Earlham College, and we were talking about different music and poetry we liked. She told me she translated Haitian poetry and gave me some of her poems. I skimmed through it and realized that she had translated one of my poems that was published in a British literary magazine," he said.

Before coming to DePauw in the fall 2006, Lafontant won a first prize award for poetry from the Bay Area Writers League (Houston) competition and was a finalist for the 2001 Frances Locke Memorial Prize. His poems have appeared in The Bitter Oleander, in an anthology of bilingual Creole and French poetry (Cents Poemes Creoles), local publications Galaxy and Remedy, and in Calabash, a journal of Caribbean arts and letters, published by New York University. His poems in Creole have also been featured in Modern Poetry in Translation (U.K).

"I don't favor poetry that's too ironic or cerebral. It isn't as nourishing as those that evoke emotion. I like the surrealists," he said. He submits his poetry once every few years, writing whenever inspiration strikes.

The following poem was published by Bay Area Writer's League in the Galaxy Literary Journal in January 2000.

"When it comes, I write. Sometimes I'll write a poem for five years, until I really like it," he said. He keeps the subjects of his art away from science, and readers have commended his existential work for its imagery and ambiguities.

"I write my poetry in between doing other work. I correct a paper, stop, have an idea, write, go back to science. I don't write every day – sometimes I do it to unwind and disconnect from science after exams." 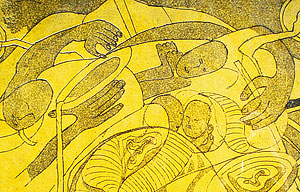 Lafontant treats his art with the same care and precision as his work in biology. While attending medical school, he took classes at Houston Glassell School of Art and learned etching, oil painting and woodcutting. He still keeps his work around the office, including "Oceano Nox" (pictured right). He says the process is methodical, time-consuming and meditative.

"It's all done precisely with your hands, nothing digital. This process is healthy," he said.

Lafontant teaches courses in Organismal Biology, Cells and Genes, Animal Physiology, Cell Physiology and Human Anatomy. Currently, he is researching mechanisms that certain fish use to heal and regenerate their hearts. Understanding the cellular and molecular basis of these processes might provide us some insight into effective ways to heal the human heart after an injury, such as a heart attack.

"We're trying to figure out why humans can't regenerate heart tissue after heart attacks, and we want to learn how to repair the heart after it's damaged. The only animal that does this with some level of success is the zebra fish," he said.

Lafontant incorporates student research into his projects with the help of biology students, Science Research Fellows, and the Fifth Year Intern Program.