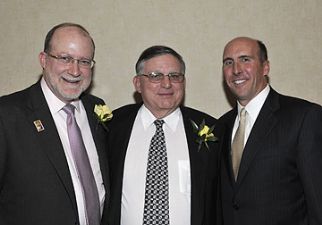 May 8, 2009, Greencastle, Ind. — Robert J. Stark, professor of biology at DePauw University, is this year's recipient of the Mr. and Mrs. Fred C. Tucker Jr. Distinguished Career Award. The honor is made annually by the president of the University to one or more senior members of the faculty. The award is designed to recognize the achievements of those faculty members who have made notable contributions to DePauw by their commitments to students, teaching excellence, their chosen disciplines, and service to the University. (at left: Neal B. Abraham, executive vice president and dean of the faculty; Dr. Stark; and President Brian W. Casey) 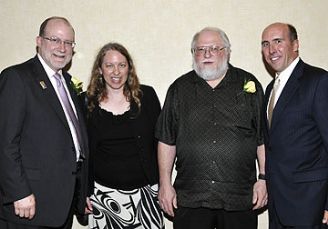 The award was one of several announced tonight at the Annual Assembly of the Timothy H. and Sharon Ubben Society of Teacher-Scholars and Faculty Recognition Dinner, held at Walden Inn.

Two faculty members -- Deborah R. Geis, associate professor of English, and Thomas D. Hall, Edward Myers Dolan Professor of Anthropology and professor of sociology and anthropology, received the Edwin L. Minar Jr. Scholarship Award. Established in 1981, the Minar Award is presented in recognition of exceptional scholarly achievement and is named in honor of its first recipient, a former professor in the department of classical studies. (above right: Professors Geis and Hall with Drs. Abraham and Casey) 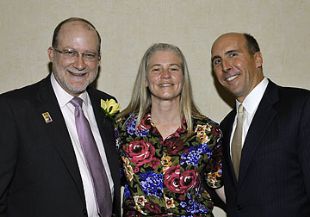 This year marked the inaugural presentation of the G. Bromley Oxnam Award for Service. Named after DePauw's thirteenth president (1928-1936), the award was created by a gift to the University by Neal B. Abraham, executive vice president, vice president for academic affairs, and dean of the faculty at DePauw. Dr. Abraham presented the Oxnam Award to Bridget L. Gourley, John Price Durbin John Distinguished Professor, professor of chemistry and biochemistry and chair of that department. Gourley was recognized, Abraham stated, "for her career-long support of programs for women in science (locally, regionally and nationally) and for her career-long support for research at predominantly undergraduate institutions and research with undergraduates." (above: Dr. Gourley with Dean Abraham and President Casey) 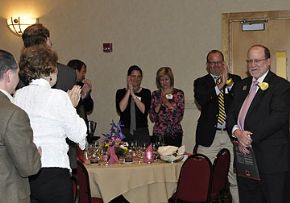 Dean Abraham, who is leaving DePauw this summer to become the executive director of Five Colleges, Inc., was himself honored with a standing ovation at the dinner for his eleven years of distinctive service to the University.

Per annual tradition, retiring DePauw faculty members were also the subjects of tributes at the dinner, and the two honorees this year were also recipients of major awards during the program. They are: Tom Hall, who has taught at DePauw since 1989 will be retiring in June 2011, but this is his last semester on campus; and Professor Stark, who came to the University in 1981.