DePauw students have the unique opportunity to spend a semester away from the University to gain hands-on experience working at professional media organizations. DePauw's Media Fellows Program requires students to participate in a semester-long internship, usually during their junior year, in their particular field of interest. Director of the Media Fellows Program David A. Bohmer said although DePauw offers many opportunities for media leadership, the internship provides experiential learning outside of the classroom that can contribute greatly to students' future careers.

"You can do a lot of media-related activities here, but it's not the same as what you would be doing out in professional media. It's a great opportunity for students to put to use what they learn here and see how, in fact, that can apply from an outside media perspective," he said.

Junior Lauren E. Weatherall is currently working at the Colbert Report for her internship because of her passion for broadcast journalism. She is a communication and Spanish double major who has participated in D3TV, WGRE, Union Board, student government, Speaking and Listening Center, and the Office of Admission.

"I knew I wanted to participate in a television production internship and was interested in being involved in something that fell between hard news and comical talk shows," she said. "It just so happens that this satirical take on the news falls right in between the two." 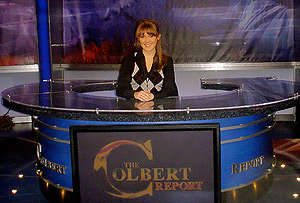 Weatherall (left, on the set of the show) was an avid fan of the show before beginning her internship, and she later learned that Jenny Morrissey ‘06 works as a production manager for the show. Morrissey interned at The Daily Show with Jon Stewart during her Media Fellows internship before Stephen Colbert left to start his own show.

"She made contacts with Colbert when she left, and that helped her get a job there," Bohmer said. "She even ended up babysitting for Colbert's children during her time in New York. You can clearly make contacts that will help you with your networking later on."

Many students who intern at major broadcast organizations start their careers in the studios of D3TV. Junior Lauren E. Wesley, who interned at The Colbert Report last fall, said she came to DePauw thinking she would work in magazine editing. After two years of experience at D3TV, she found her niche with video production.

"I chose the internship because I would rather work in the environment of a comedy news show than traditional news," Wesley said. She is a communication major and art history minor who has worked for D3TV since her freshman year. She served on D3TV's board of directors and now holds the title of the executive producer for the station. Next year, she and fellow classmate Alyssa A. Jewell '10 will run their own show, "The View," which will cover the lighter side of news.

At Colbert Report, Wesley was able to meet people such as Yo-Yo Ma and Tom Brokaw, and she particularly enjoyed The Colbert Report's Christmas Special. She also formed great connections with her fellow interns that made the experience more rewarding.

"The interns and I formed a bond since we were together so many hours each day. We would all hang out on weekends," Wesley said.

Through a seminar series featuring various staff members, she was able to work closely with the staff members and see what went on in every aspect of the production. Despite the long workdays that spanned about 10 hours per day, she says the experience is a rewarding challenge. 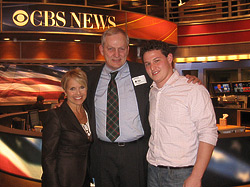 Other Media Fellows, such as Benjamin C. Solomon '10 (pictured right), who is currently interning at CBS News in Washington, D.C., have worked closely with professional reporters. When Bohmer visited Solomon, as he does with all off-campus interns, Solomon felt comfortable enough to walk right up and introduce him to anchor Katie Couric. Other interns have formed relationships with members of The Today Show through their semester internships.

The Media Fellows staff members help students find the right internship for them and prepare for the interview process.

"We sat down on a number of occasions to discuss where my interests lie, what my options are, and how I should go about pursuing them," Weatherall said. "I am very thankful that Bohmer was there to help guide me through the process."

Media Fellow internships offer much more than the coffee-getting, mail-sorting, tape-filing internships students might encounter through other avenues. The Colbert Report internship involves a wide range of responsibilities that gives its interns exposure to the many facets that go into making a daily show.

"I've worked with almost all of the departments in the building. I'm incredibly appreciative of this because I feel that I've gotten a great deal of experience, whereas interns at other places might be stuck in one department or only working with a very select group of people, and as a result, aren't able to get a feel for how the entire production is run," Weatherall said.

She said interns work primarily with audience, Web, field, prop and production departments. Weatherall has completed a number of projects that have been put on the Web site - usually spin-offs of episode segments, a continuation of a project proposed by Colbert or a skit involving a regular character. She also helped finalize scripts for the show and worked on video projects, field shooting and studio setup. 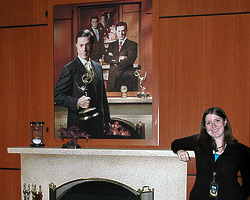 Wesley (left) learned not only what areas of TV production she enjoyed through the internship, but which aspects of television she couldn't see herself working in as a career.

"By seeing the process behind the scenes, I was also able to rule out certain areas I now know I don't want to pursue," Wesley said. "It's confirmed for me that I actually like TV production, but want to try longer term projects." This summer, she plans to work for Creative Street Media Group, a small production company.

"There are certain skills that I've gained through my experience with different student media outlets at DePauw - namely, D3TV - that have most definitely served as valuable background knowledge and helped me pick up much quicker on what people do here," Weatherall said. "For example, my experience with camera equipment and, especially, control room functions has allowed me to observe and understand the differences between this professional production and the small-scale productions put on in the studio of DePauw's own D3TV."

Weatherall plans to keep her contacts and work in television through her senior year. Although she doesn't want to limit her possible career paths just yet, she says she is extremely appreciative of her internship experience.

"What I have learned here will be useful down the road," she said. "The Colbert Report staff treats interns really well, and they consider our internship to be a learning experience and not just an opportunity to do all their busy work."

Bohmer said the Media Fellows internship is an opportunity for students to learn experientially and see what it's like to work a professional job before graduation. He also says that, because of the semester-long duration of the internship, students become productive, valuable members of the team.

"Any time you're in a new job, you go through a learning curve. With our internships, there is enough time to feel that you're a part of it, that you know enough about what the job entails and you have learned what the business is about. Even if a student decides to go in a different direction career wise after the internship, no one has said this wasn't a valuable experience."