July 25, 2009, Greencastle, Ind. — Angelo J. Loumbas, a wealth strategies adviser for US Trust, Bank of America Private Wealth Management and 1988 graduate of DePauw University, has been installed as the 2009-10 president of the Rotary Club of Chicago. The world's first Rotary Club, it is also known as "ROTARY/One."

A member for nearly seven years, Loumbas has previously served as chairman of the club's membership committee and as a trustee of the club's foundation.

An attorney, Loumbas has served as Illinois' assistant state's attorney and in private practice representing closely held businesses, families of high net worth, and not-for-profit institutions such as the Art Institute of Chicago. After graduating from DePauw, he earned an M.B.A. from the University of Notre Dame and his J.D. from Indiana University School of Law. (at right: Loumbas being installed as president by Rotary International President John Kenny)

Founded in Chicago in 1905 by an attorney named Paul Harris and three of his business associates, the Rotary 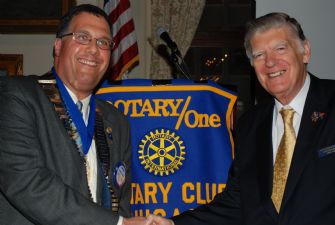 movement grew quickly from ROTARY/One's initial purpose as a business networking group that rotated its meetings between offices of its members, and thus the name "Rotary," to an international organization composed of business leaders around the world. Today, there are over 33,000 Rotary clubs and 1.2 million Rotarians in over 200 countries worldwide.