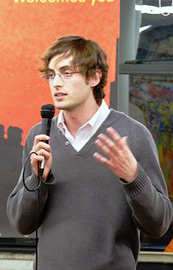 Before he arrived at DePauw, Stuart E. Schussler ‘07 knew he wanted to travel to the Spanish-speaking world, but he had no idea that his trips would lead to a role as a Pan-American community organizer. As a freshman, Schussler participated in an illuminating Winter Term trip to Ecuador – led by Associate Professor of History Glen D. Kuecker – that set him on that path.

"Ecuador opened my eyes to global connections I had never comprehended before," Schussler says. "I saw how communities in Ecuador were being intimidated, co-opted, and attacked with impunity because they refused to be displaced from the rich farms they had carved out of this land. I also saw how, by organizing and connecting with other groups engaged in similar struggles, these Ecuadoran communities – deemed indigent by traditional standards – were able to successfully resist some of the world's largest corporations."

Schussler returned to Ecuador two more times - once more as a DePauw student and again while studying on a Fulbright Grant. After completing a master's program in international relations during his Fulbright trip, Schussler returned in 2008 to join the Mexico-U.S. Solidarity Network (MSN), based in Chicago, which supports grassroots community projects on both sides of the border.

"We're engaged in globalizing from the bottom up, by building bridges between grassroots movements in different parts of the world," Schussler says. "I think that true wealth rests in strong, autonomous communities where people support each other and strive for a common purpose. Members of those communities are going to be best suited to face the economic challenges of the future."

In Chicago's Albany Park, one of the city's most ethnically diverse and economically impoverished neighborhoods, MSN runs the Albany Park Autonomous Center where people can go to learn English, communicate with their families abroad using the Internet and organize community initiatives. 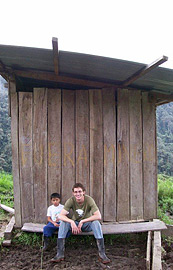 Schussler coordinates the organization's semester-long, study-abroad program in which students are able to live with and learn from dynamic social movements in Chiapas, Tlaxcala and Mexico City. Half of students' tuition is donated to the communities in which they study.

"The aim of the study-abroad program is to introduce U.S. students to the innovative ways communities are organizing in Mexico so that they can return to their homes and use those lessons in their own work," Schussler says. "In Chiapas, there are indigenous peoples who share a common history of 500 years of exploitation under various forms of colonialism. They understand very well that they must empower themselves by working together to develop forms of self-government, education, healthcare, self-defense and production, and that the government is only going to offer these services with major strings attached. In Tlaxcala, one of the various groups organizing is a number of men contracted to do farm work in the U.S., during and after the second World War, who had money removed from their pay for an obligatory ‘savings' account that was never turned over to them. And in Mexico City, students live in a gated community, founded by squatters decades ago, and have since made their neighborhood into a self-sustaining entity complete with its own police, schools and clinics."

MSN's ambitious work requires Schussler to take on many duties, such as teaching in the study-abroad program and organizing public events. The demands of a small-but-dedicated environment are nothing new for Schussler, whose experience at DePauw's Russell J. Compton Center for Peace and Justice required many of the same skills.

"My first assignment upon starting work with MSN was to plan a two-week, five-state speaking tour of the U.S. by a Mexican activist, Jorge Santiago, who also visited DePauw in April," Schussler recalls. "Thankfully, it wasn't very different from the work I'd already been doing for three years with the Compton Center. Social justice work, or any endeavor that you're truly passionate about, involves a mix of big dreams and small details. Work at the Compton Center involves exactly that. Interns are invited to envision changes they'd like to make in the Greencastle community, U.S. politics and global issues." 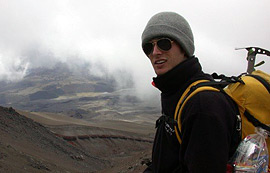 In addition to his work with MSN, Schussler serves as a board member for the Canary Institute, an organization co-founded by Kuecker and P. Jacob Gross, a 2000 graduate of DePauw. The Institute is dedicated to moving economies toward sustainable and environmentally neutral practices.

"Humanity is not investing in green alternatives at nearly the pace necessary to confront peak oil production and the vicious ecological cycles touched off by pollution," Schussler explains. "At best, this could mean a very difficult transition to a society living with amazingly expensive oil, few energy alternatives, and rampant global warming. At worst, there could be wars for resources. Rather than just speaking out about these scenarios, the Canary Institute is committed to promoting alternatives."