Jinyu Liu, assistant professor of classical studies, attended an international conference during the summer on ancient textiles in the “City of Salt.” Hallstatt, Austria initiated its salt mines more than 7,000 years ago and has justly earned the right to its nickname. Salt, often referred to as white gold, was a valued commodity and used by craftsmen to set dyes in ancient textiles.

Liu, who specializes in Roman history, was invited to Hallstatt to participate in the 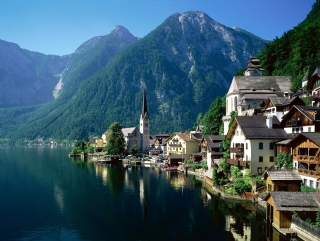 conference, Clothing and Identities: New perspectives on textiles in the Roman Empire. The conference Web site states: “The main objectives of the DressID project are to provide a position in cultural history for clothing and textiles in Antiquity, and to demonstrate how clothing is a key to identity studies.”

Liu says, “As a doctoral student, I wrote my dissertation on the organization of craftsmen involved in textile production in the Roman world.”

It is also the subject of a new book she wrote, The Collegia Centonariorum: The Guilds of Textile Dealers in the Roman West, published by Brill Publishing. “The collegia centonariorum have often been seen as the municipal fire-brigade, or status groups of sorts in the Roman cities,” Liu says. “Intricately connected with the textile economy, they illustrate how elements as diverse as material demand from the military and the city of Rome, legal infrastructure, urban development, and organizations of urban-based craftsmen and tradesmen may have interfaced with each other in the Roman world.”

“In general, the book will be useful for all those interested in ancient social history, economic history, Roman Empire, Roman urbanism, Latin epigraphy, ancient textile economy, military supply, as well as patronage and the lower classes in ancient society,” Liu says.

After the conference in Hallstatt, Liu traveled to several other cities in Austria and in Germany. It was her first trip to both countries. “I connected the trip to several courses I offer, especially Roman Civilization and the Impact of the Roman Empire,” she says. “The Romans were exporting their artifacts, tastes and lifestyles, and I am interested in knowing how the locals reacted to this.”

“There are strong Roman identities in remote areas that show the extent of the influence of the Roman culture,” she says. “I would like to see some of the museums be more open to other elements in a regional context. Some of these cities became Romanized later, so there would have been a lot of local elements, such as monuments and inscriptions, that need to be identified - before and after the Romans arrived.”

Liu describes her trip itinerary as a journey to the natural boundaries of the Empire - the Rhine and Danube Rivers, and the frontier provinces (Noricum and the Upper Pannonia) as defined by the Danube. “You can easily see what the boundaries did to the difference of culture,” Liu says.

In Germany she saw very few Roman remains, which is not surprising, according to Liu. “The Rhine River cut through Germany, and on one side there are many Roman monuments and very few on the other side,” she says. “The Romans tried to cross the Danube River but didn’t stay there very long.”

“I have always been interested in knowing about interactions between the old and the new. It fascinates me. I’m interested in two-way traffic, not one-way Americanization or Romanization.

“Traveling is so inspiring. It’s a very important experience for classicists and ancient historians as well as for students,” Liu says. "There is so much to see. The entire Mediterranean world is so vast.”

"My trip to Austria and Germany certainly benefits my Impact of Empire class. In that class, I usually do case studies that illustrate how the conquest of Rome impacted cultures in the Mediterranean world, and how the so-called 'Roman Civilization' was constantly evolving due to the reverse-influence of the pre-existiting cultures in the Mediterranean world," Liu says. "I used to use Sicily, Gaul, Egypt and Dacia as examples. This trip allows me to add Noricum and Upper Pannonia to these case studies."

DePauw students can travel abroad independently or through the Winter Term program. “One of my former students did an independent study trip during Winter Term as a result of taking my Impact of Empire class,” Liu says. "He returned from his trip with an illustrated report of his experience. He found so many similarities between Paris, Barcelona and Rome, all of which were influenced by Roman civilization.”