New Hospital Unit Will Honor the Memory of Kenneth Holland '92 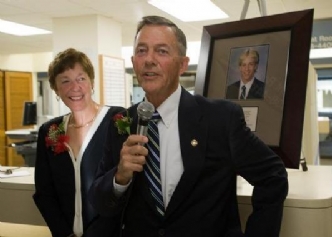 October 20, 2009, Greencastle, Ind. — "Bob and Betsy Holland in 1990 suffered the worst tragedy that parents can experience: Their son, in the summer before the start of his junior year at Indiana's DePauw University, lost his life following a serious car accident," begins a story published today in Illinois' Downers Grove Journal. "The Hollands have now made sure that the memory of their son, Kenneth Brooks Holland, a former football and basketball star at Downers Grove South High School and a member of the National Honor Society, will live on. Through its charitable trust, the Hollands have provided funding to help Advocate Good Samaritan Hospital in Downers Grove design and build a new oncology unit, one built to provide the most comfort possible for patients, family members and visitors."

Bob and Betsy (Gross) Holland (pictured above) are both 1965 graduates of DePauw. Kenneth Holland (whose portrait is seen behind them and below) was a member of the Class of 1992.

The hospital's Kenneth Brooks Holland Oncology Unit will treat patients diagnosed with cancer. Dan Rafter writes, "A key feature of the new unit will be comfortable rooms for patients and equally comforting waiting rooms for their family members. After their son's accident, the Hollands spent long weeks by his bedside. Unfortunately, there were no comfortable chairs in the hospital's waiting area. This left the Hollands no choice but to get as much sleep as they could on hospital floors, just so they could remain close to their son."