Passionate about the role of women in computing, for nearly 20 years Gloria Childress Townsend, professor of computer science and coordinator of the Women in Science Program, has developed programs that help counter negative stereotypes attached to computing and encourage women to see the greater good that can come from a career in computer science.

"There are a lot of myths," Townsend says. "One of them is that computer science is boring, that it's only about programming. Many think that one sits at a computer desk getting a monitor tan and never interacts with people. It's so hard to work against this image because it just perpetuates. Students don't see how many ways there are to use computer science to help people."

This year, the Wide Web of Women: www.2 project — developed by Townsend and her colleagues at the Association for Computing Machinery (ACM), Anita Borg Institute (ABI) and National Center for Women & IT (NCWIT) — received a three-year grant of $1,161,734 from the National Science Foundation (NSF) to support efforts that broaden women's participation in computing by emphasizing small regional communities across the country.

The first line of the grant proposal to NSF states: "Despite computing's role in driving innovation and shaping modern life, computing stands out as the only [Science, Technology, Engineering and Mathematical] field where women's representation continues to decline." 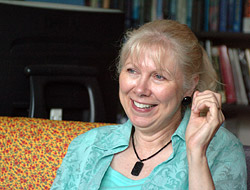 In 2004 Townsend organized the first regional conference for women in computing based on an idea she developed more than a decade ago concerning how to reverse the low numbers of women in computer science. "In 1996 I spent a sabbatical semester thinking about the concept," Townsend says. "A vision developed — a vision that created geographic circles for regional organizations — with an annual or biannual conference in each small region and a ‘women in computing' organization for each school to sustain the groups among conferences times. I was able to create such circles in Indiana and find collaborators to organize Colorado, Ohio and Michigan. The NSF grant will propagate circles in many other states, so the vision — more than a decade in the making — becomes much closer to reality."

The Wide Web of Women holds regional conferences to address such issues as encouraging women to see the vast world of opportunities available in computer science. Student speakers have included Tonya Stroman, a graduate student at Indiana University who worked for NASA to build a software system that helps astronauts fight idleness in space, and a keynote speaker, Kay Connelley, who used mobile computing technology as an effective way of monitoring the health of diabetic patients.

The conferences are 24-hour long regional events aimed at building women's confidence through participation and networking. Women prepare computer science research posters, many of which address the ethical issues of computing — such as use of social computing (e.g., Facebook), one laptop for every child movement, and encouraging women of color in computing, among others. Typically, a keynote speaker addresses the participants at a dinner, and a career fair features representatives from industries, such as Google and Microsoft, that present job and internship opportunities to potential candidates. Although these events are open to all, the average attendance ranges from 75-130 people, and participants are usually women who live close to the conference site.

In addition to leading the Wide Web of Women project and helping to plan regional conferences with her colleagues, Townsend also leads the student chapter of the Association of Computing Machinery (ACM) at DePauw. At the chapter level, she promotes attendance at regional conferences by working with women, either individually or in pairs, on the development of their posters.

"I want to tell women that they can be leaders in the classroom, in research and in their future careers. I want to instill confidence. I want to show them that they are not alone, that there are all these women in their neighborhoods with whom they can network," Townsend says. "None of my work — not research, teaching or any other sort of service — fills me with the same level of satisfaction that I feel from service toward correcting the under-representation of women that currently exists in computing."