Today, claims of a Soviet plot to spread communism through art might make great material for the Colbert Report, but even Hollywood, for all its fame and fortune, wasn't able to escape McCarthyism. New York's Museum of Modern Art (MoMA) – the center of Modern art in the United States – defended itself from Dondero's quixotic tilts with claims that its art had no politics. MoMA eventually survived Dondero, but at the cost of truth.

So argues artist Yevgeniy Fiks, whose Communist Tour of MoMA will be shown March 5-26 at the Low Road Gallery, 111 W Washington St. in Greencastle. Fiks will be in Greencastle to open the show and will give a lecture entitled Responsibilities of the Post-Soviet Artist at the Eugene S. Pulliam Center for Contemporary Media on March 4. 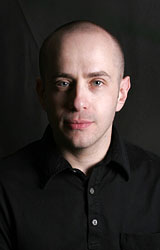 "MoMA's position was one of self preservation," Fiks, pictured right, says. "They claimed to exhibit art, not artists, when at the same time Picasso was saying that he was a communist and so were his paintings. MoMA effectively separated Modern art from the political ideologies of many of the artists."

The Communist Tour of MoMA introduces visitors to history that became a casualty of the Cold War's rhetorical battleground. The multiple-medium exhibit juxtaposes art art based on MoMA's downplayed communist connections with anti-communist propaganda of the same era.

"History needs to be addressed factually; it cannot be accepted without scrutiny," Fiks says. "I want people to question what they know about art history and not take the common narrative for granted."

Fiks has seen and lived that history from different perspectives. He was born and raised in Moscow, but moved to the United States to pursue his art following the dissolution of the Soviet Union. After moving to New York, he became interested in "the shared trajectories of communist histories in the West and Russia during the 20th century."

Most of Fiks' works now deal with reconciling historical narrative and fact. His series of oil paintings entitled Song of Russia is based on Hollywood films that depicted life in the Soviet Union in a positive light, and were supported by President Roosevelt at a time when American and Soviet interests aligned during World War II. The films later became an object of controversy in the House Un-American Activities Committee, causing many of the films' producers to be blacklisted. 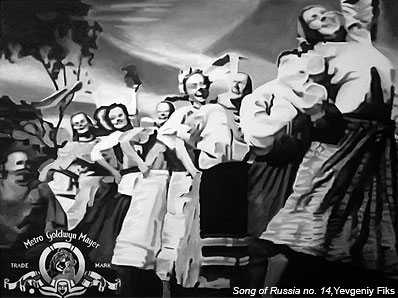 Three recent DePauw graduates played a significant role in Fiks' visit. Marc Jayson Climaco '07 met Fiks in New York City and thought that his art should somehow be brought to DePauw. He spoke with Luke Schooler ‘09, co-founder of the Low Road Gallery and a fifth-year intern in at DePauw, who agreed to help organize a show.

"As an art major at DePauw, you draw from lots of different sources," Schooler says. "Fiks speaks not only to students of the arts, but also of Russian studies, of history – he touches on several different bases in his work. I think he's a really good fit for DePauw."

Schooler and Julie Rooney '09 opened the Low Road Gallery in 2009 with support from the Student Arts Council. Their idea for the gallery developed during a study abroad experience in Glasgow, Scotland, where small contemporary art galleries are common.

"We saw an opportunity for contemporary art to be present in Greencastle because it could be a common link between the community and the University," Schooler says.

The gallery has a section dedicated to local artists' work in addition to its rotating monthly exhibits.

A third DePauw alumnus, Douglas Strodtman '09, did research for The Communist Tour of MoMA during a Winter Term 2009 internship with Fiks. 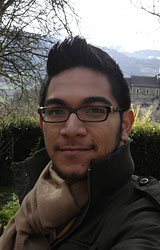 Climaco (right) hopes that Fiks' visit will engage students and community members amid heated political discourse in the United States.

"Many of the of the political issues we are dealing with today aren't new," says Climaco, who studied Conflict Studies at DePauw and currently provides communications strategy work for international nonprofits. "At the same time, much of the written history we use to draw our opinions from is inherently flawed. I think that bringing Yevgeniy's work to Greencastle, a microcosm of American society, is a good way to engage and deconstruct our histories so that we can start the real conversations that need to happen."

More about Yevgeniy Fiks can be found on his Web site, www.yevgeniyfiks.com. Information about the Low Road Gallery is available at www.lowroadgallery.com.