April 29, 2010, Greencastle, Ind. — "Obtaining a doctorate in geology, with all the books Bill Krueger had to dig through to do it, might not have been an option had he never picked up that first book as a child," begins a tribute to the 1958 graduate of DePauw University, who passed away on April 24. "So later in life, the longtime Tulsan decided to make sure that other children got to take home first books of their own. He believed that with a good page-turning start, they could read their way to successful lives and careers."

Dr. Krueger, who was 73, spent his career as a geologist with BP Amoco, founded the Krueger Charitable Foundation in 1994, notes Oklahoma's Tulsa World. "Since that time, the nonprofit foundation has provided grant funding primarily to programs that encourage reading," writes Tim Stanley. 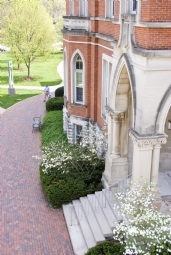 "The idea is to give children who might not have any books at all the chance to start and build up their own libraries," Carol (Koock) Krueger '59, tells the newspaper.

The text adds, "The programs provide new books, one a month, to schoolchildren from lower-income areas. The books are the children's to keep, and they receive an extra one at the end of the year. In Tulsa, some 13 Tulsa public schools participate. The foundation also funds the Oklahoma Literacy Coalition's annual Bill and Carol Krueger Adult Literacy Award, which recognizes an adult learner in one of the coalition's literacy programs ... A St. Louis, Mo., native, Bill Krueger also donated a lot of time to Camp Fire USA and the youth development organization's Tulsa-based Green Country Council. Krueger was president of the council's board in 1980-81 and served from 1983 to 1986 on the Camp Fire USA national board of trustees."