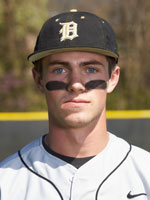 May 4, 2010, Greencastle, Ind. — DePauw University sophomore Rob McPike is on the 2010 roster of the Richmond RiverRats, a team in the collegiate Prospect League. A story in today's edition of Indiana's Richmond Palladium-Item cites McPike and previews the upcoming season.

A first baseman and pitcher from Avon, Indiana, McPike batted .315 with two home runs and 45 runs batted for DePauw during the 2010 season.  On the mound, he compiled a 1-2 record and a 2.20 earned run average.

Learn more about the baseball Tigers, who compiled a 26-17 record this season, at the team's official Web page.