May 10, 2010, Greencastle, Ind. — "After 12 years as bishop suffragan of the Episcopal Diocese of Maryland, the Rt. Rev. John L. Rabb, announced his intention to retire at the end of this year," reports the News-Post of Frederick County, Maryland. A 1966 graduate of DePauw University, the 65-year-old bishop, who is second in the Diocesan hierarchy, tells the newspaper he looks forward to "a very active retirement" and currently has two manuscripts before publishers -- "Imaginative Preaching" and "The Occasional Preacher."

"Born in Des Moines, Iowa, Rabb received a bachelor's degree in history from DePauw University in 1966, a master's degree in history from the University of Iowa in 1969 and a master's in divinity from the Episcopal Divinity School in 1976," writes Ron Cassie. "In the fall and winter of 2004, Rabb was a fellow in residence at the Franciscan International Study Centre in Canterbury, England. Rabb began his ordained ministry in 1976 as curate at the Church of the Ascension in Gaithersburg. In 1979, he became rector of the Church of the Holy Apostles in Arbutus. In 1988, he was called as rector of St. Anne's Church in Atlanta."

The story adds, "Rabb has a deep interest in the 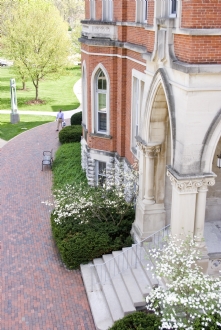 development of the ordained ministry and served as chairman of the Commission on Ordained Ministry in the Diocese of Maryland and the Diocese of Atlanta. Also concerned about social justice and ecumenism, he served as president of the Christian Council of Metropolitan Atlanta in 1996."

"I think what I've always enjoyed most is preaching," Rev. Rabb tells the newspaper. "It's a passion for me. I do like writing. But while I do write my sermons, I usually don't refer to the text when I'm preaching -- I am comfortable in front of people and enjoy the presentation as well."

Access the complete article at the News-Post's Web site.