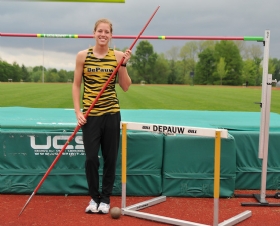 As she prepared to compete in her first-ever heptathlon in May, Courtney N. Lauer ’11 set a goal of qualifying for the national championships. She did just that, receiving a high provisional mark at the Yellow Jacket Multi-Event Meet at Defiance College in Ohio, and surged to a ranking of 12th in the country in NCAA Division III.

On May 27-29, she’ll challenge herself in the 2010 NCAA Outdoor Track and Field Championships at Baldwin-Wallace College in Berea, Ohio.

Lauer likes the organization of a multi-meet as compared to a regular track meet. “I sometimes have to run between two or three events at the same time, but in the heptathlon, the events are spaced out evenly.

“A heptathlon is based on a point system. So for each event, the points earned depends on how fast you run, and how far you jump or throw. It’s the number of points for the individual events that determine the total points,” Lauer says. “I’m not a standout in any one event, but I can do a lot of them and am decent at them. That’s what you’re looking for in a heptathlete.”

Lauer is modest about her ability. At the meet, she broke DePauw’s school record of 3,038 points set in 1995. According to DePauw high jump coach Peter “Pete” C. Crary, Lauer's 4,426 beat the record by 1,388 points. “In fact, she broke the record after only five events when she totaled 3,136 points – with the javelin and 800 meters still to come,” Crary says.

“There are formulas – complicated ones – that determine each athlete's score based on performance in each of the seven events. Once each athlete has her individual score for each event, after the 800-meter race on day two, all seven scores are totaled, and the winner is the one with the highest total.

“The heptathlon differs from running individual races, or doing individual throws or jumps in a meet, in that the competitors are battling the scoring tables – derived from the formulas – not each other,” Crary says. “It is not who is best in this event or that event, but rather who can put together seven events better than anyone else.” 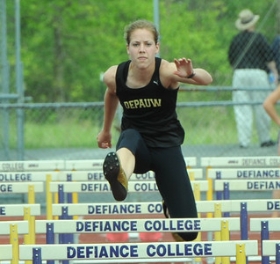 Crary uses an iTouch application that calculates Lauer’s points in each event. “I don’t have to consult the tables, and I can keep a running total, which allows me to figure what she needs to do in the remaining events to attain a certain point total. This is especially valuable as the contestants start the seventh and final event, the 800-meter race. Large point swings can take place in this event, and it is important to run a particular pace – remembering that it doesn't matter whether you win the race – you want as many points as you can get."

Lauer says it’s her teammates and coaches who have inspired her to work so hard. “My teammates have backed me 100 percent of the way as I've experimented and tried new events. It was really great to have that support behind me and see everyone's excitement when I qualified for nationals.

She depends on all of her coaches’ expertise, but Crary is following Lauer’s events very closely. “He’s gotten really into it this year. He’ll say, ‘I read about hurdles and you need to do this, and this and this.’ It’s fun in practice to work with him. He does point calculations after every event.”

Out of the seven events, Lauer’s favorite is high jump. “I probably have the most experience in this event, and it scores a ton of points for me in the heptathlon. Also, it's just a fun event.”

A shoulder injury hasn’t stopped Lauer from training or competing, although it will require surgery this summer. She’s had to be somewhat cautious, especially with the hurdles.

“Hurdles are probably the most challenging event right now because I just learned how to do them a couple of weeks ago – in an attempt to protect my shoulder – in case I hit one and fell on it,” Lauer says. “I'm getting more and more comfortable with them every week, and I hope to improve my time even more at nationals.”

Lauer, a mathematics major and economics and management minor, is a Management Fellow and member of the women’s basketball team, in addition to being a member of the track team.

As part of the Management Fellow requirement, Lauer completed a semester-long internship last fall as an actuarial intern at a financial consulting firm. She was asked to return this summer and is hoping that it may lead to a permanent position following graduation next year.

In the meantime, Lauer is looking forward to her senior year and another year of training for the heptathlon. “A couple of my teammates have gotten on board with the heptathlon, too, and participated in the multi-meet with me. More people are getting interested. You never know; we may be starting something here.”