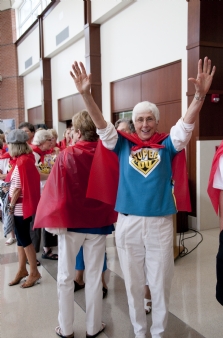 June 12, 2010, Greencastle, Ind. — Wearing red capes, members of DePauw University's "Super Sixty" Class of 1960 entered Kresge Auditorium to loud applause at this afternoon's Alumni Reunion Celebration. The event is part of DePauw's 2010 Alumni Reunion Weekend, which began Wednesday and continues through tomorrow.  Approximately 1,100 alumni are back on campus for the events.

[Download Video: "Larry Clarkson '60" - 1622kb] "My friends, superior reading, writing and listening, along with real respect for others, these are what I believe gave the Super Sixty DePauw class 'uncommon success,'" Lawrence W. Clarkson told fellow members of the Class of 1960 in his golden anniversary address. Clarkson, retired senior vice president of the Boeing Company and retired president of Boeing Enterprises, offered the audience some DePauw history and reflections on how the University has enriched the lives of his class, as well as generations of college students. "I am 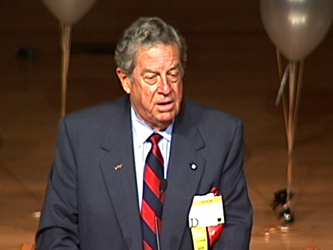 happy to report that today I believe these are still what students learn at DePauw and will give DePauw's Class of 2010 and future classes 'uncommon success,'" stated Clarkson, a longtime member of DePauw's Board of Trustees.

At DePauw, Clarkson noted, " We learned to read with the real comprehension. We understood fully the message in the written word. We learned to write clearly so others could easily understand the message we intended to convey. We learned to listen critically to carefully understand what others were saying. This lesson is the one, based on my own experience, many people educated at other fine institutions never learned. How many times have you been in a discussion with someone who wasn't really listening to the point you were trying to make, but rather was thinking about the next point he or she wanted to make? Successful oral communication requires a two way street. You need to listen as well as speak." 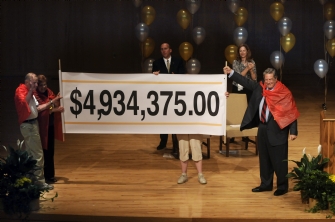 He noted, "Whether it was in the classroom, the lab, at chapel, in our living units or in athletics, we learned the importance of being ethical, and honest and to respect the rights and feelings of others. Another lesson many others seem not to have learned."

The Class of 1960 presented the University with a 50th reunion celebration gift of more than $4.9 million

When the Class of 1985 arrived on the DePauw campus, Kathy (Patterson) Vrabeck reminded her classmates, Ronald Reagan had recently been elected to his first term as president, MTV has just launched, the Dow Jones Industrial Average was at 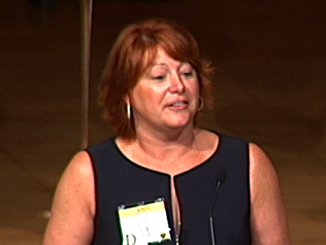 875, and construction of the new Lilly Center was winding down.

"A little piece of DePauw stays with you forever," said Vrabeck, who leads the digital entertainment efforts of Legendary Pictures, the company behind such movies as The Dark Knight, 300 and Watchmen.

[Download Video: "Kathy Vrabeck '85" - 4844kb] "We're fortunate. Our time at DePauw, in recent words by Dr. Casey, shaped us as liberally trained critical thinkers and creators, prepared for life's work. And we have a lot of life's work - and play -- ahead of us. We are fortunate. We're at the time in our lives where we can contribute more in our communities and lend much needed help. Many in our class are leaders in their workplaces or professions. Many are leaders in their communities. And many are weighing choices of what to do next -- whether as a result of kids leaving home or the changing job landscape. And given the many needs that exist in our communities, the nation, and the world, we have an opportunity -- and perhaps even a duty -- to contribute to making a difference for others."

She continued, "So as you enjoy your time 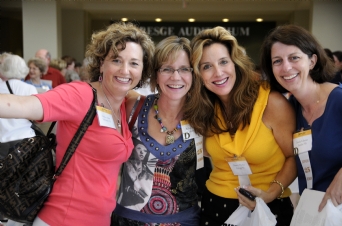 on our beautiful campus this weekend -- catching up with old friends and perhaps a garlic cheeseburger, take a moment to remember that feeling you had in 1985 when the whole world was in front of you. Make a commitment to do what you can -- locally, nationally, or globally -- to make a difference and better someone's life and our world. Just think about how enormous our collective accomplishments to come can be."

Kathy Vrabeck is also a member of DePauw's Board of Trustees.  Hear her complete remarks:

A new tradition was launched this year as the five-year reunion class was represented by a speaker. James D. Larson teaches humanities at the Charles A. Tindley Accelerated School in Indianapolis, a four-star school, where he was named this year's "Teacher of the 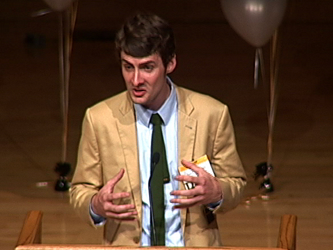 Year." The school has strong DePauw connections. It was founded six years ago by Siri Loescher '84, the school's principal is Marcus Robinson '94, and John Neighbours '71 serves as chair of the charter school's board.

"At the moment, there are a multitude of pressing issues facing our nation and our world, yet I submit to you that there is no work more inextricably linked to the future of this nation than ensuring that all children receive an equal, quality education," Larson told his classmates. "Because fifty-six years have passed since the Supreme Court handed down its landmark decision in the case of Brown vs. the Board of Education of Topeka. And still today, the color of your skin and your zip code are almost entirely determinative of the quality of public education this nation affords to its future. The consequences of this enduring injustice are grim."

[Download Video: "James Larson '05" - 2112kb] "Fellow alumni, our nation's underserved children need us to identify an effective school or community program and commit ourselves to offering our unique strengths to them. And where there are children in need of such a school or program,  no one is better suited than a collection of DePauw alumni to collectively create such opportunities. That DePauw alumni did just this in opening and sustaining the Charles A. Tindley Accelerated School is one, but certainly not the only, example of what we are capable of doing when we find a way to marry 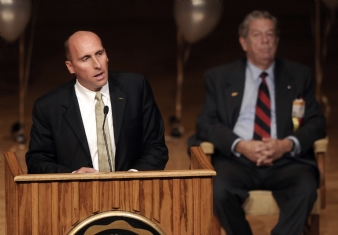 our respective DePauw-instilled strength and conviction for the betterment of children."

His speech can also be heard in its entirety:

"There are chapters and times of your life that go away," President Brian W. Casey told the alumni assembled in the Green Center for the Performing Arts.  "But there is something about a college -- a good and warm college -- that converts the passage of time into memory and somehow makes memory always available to you in surprising and powerful ways.  One reason that you come back to DePauw, of course, is that you were young here, and to come back is to see yourself that young again and to stoke the memories of what may very well have been among the happiest days of your life.  But it wasn't just that you were young here.  You were young here in the best of all possible ways.  To be young at DePauw is to be deeply hopeful in a rare and special way -- to believe the world is a place of possibility and promise, to believe that life is yours for the taking, that all knowledge and all ideas are there for you, that all doors are open, and that they always will be."

Dr. Casey says reunions "remind us of our purpose, 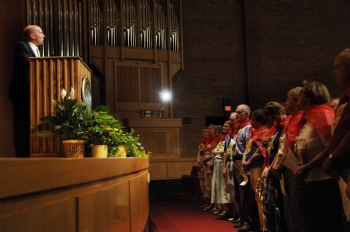 our place and the magic we must steward.  Good colleges and beautiful campuses are those rare places where romantic notions stay alive. To have been educated here, to have made your friends and your communities here, means that you learned to keep the notion of possibility alive.  Your time here, your memories, remain available to you because of who you are and who you became here."