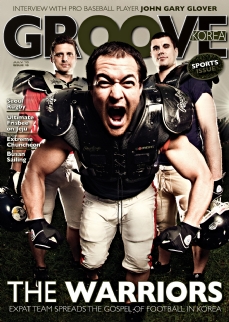 July 21, 2010, Greencastle, Ind. — Ian MacLeod, a 2007 graduate of DePauw University, is a member of the Seoul Warriors, a semi-pro football team in South Korea.  The team is featured in the current issue of Groove magazine, and MacLeod is seen in the center of the photo on the cover of the publication (seen at left).

The team, which plays American-style football, was formed by MacLeod and some of friends, and is largely made up of foreigners.  They'll play their first game in October.

MacLeod, who played football at DePauw, is an associate professor of

English at Kyonggi University, after having completed his master's degree.