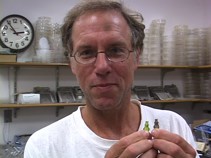 August 27, 2010, Greencastle, Ind. — A paper co-authored by Wade N.  Hazel, Winona H. Welch Professor of Biology at DePauw, and his former student, Qiming "Q.E." Deng, a 2005 graduate of the University, is published in the latest issue (volume 157, number 9) of Marine Biology.  The article in the international jounal is titled "Population structure and phylogeography of an acorn barnacle with induced defense and its gastropod predator in the Gulf of California." (photo: Professor Hazel)

The research was funded by a National Science Foundation grant and much of the data was collected by students in Dr. Hazel's genetics class. Additionally, Steve Timm, John Rabb Emison Professor of Creative and Performing Arts and professor and chair of communication and theatre, traveled to California with Hazel to help with the collecting of the organisms.

Deng, who was a biochemistry major and Science Research Fellow at DePauw, is working toward a Ph.D. in biological chemistry at the University of California - Los Angeles (UCLA).

An abstract of the article notes, "Using sequence variation in the mitochondrial cytochrome oxidase I locus, we estimated the population structure and phylogeography of the intertidal acorn barnacle, Chthamalus anisopoma, and its gastropod predator, Mexacanthina lugubris angelica. Both are endemic to the Gulf of California, being derived from taxa on the Pacific coast of the Baja peninsula, and both exhibit phenotypic plasticity for traits affecting their coevolutionary interactions. Consistent with expectations based on differences in dispersal, C. anisopoma populations generally lack geographic structure, while those of M. l. angelica are more strongly structured. However, the variable degree of differentiation in both species suggests that the extent of reciprocal selection and local adaptation in the species will vary geographically, a result consistent with the concept of a geographic mosaic of coevolution. The pattern of variation in C. anisopoma shows clear evidence of recent spatial expansion, possibly due to increased habitat availability following the last glacial maximum. Phylogeographic analyses suggest that M. l. angelica diversified into three distinct clades after the colonization of the Gulf. Overall, our results illustrate how dispersal potential, geological and climatic events, and recent population growth have impacted the pattern of sequence variation in the two species."

Marine Biology publishes original and internationally significant contributions from all fields of marine biology. Special emphasis is given to articles which promote the understanding of life in the sea, organism-environment interactions, interactions between organisms, and the functioning of the marine biosphere.