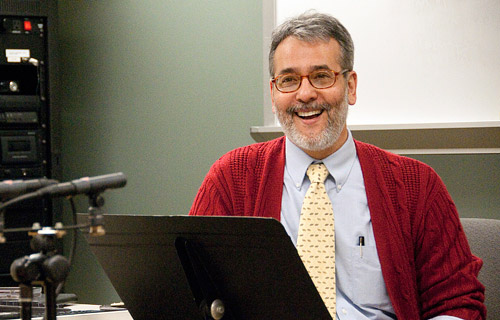 Back in the 1930s, if you wanted to go dancing in Indianapolis, the Indiana Roof Ballroom was the place to go. While greats such as Cab Calloway and Benny Goodman kept crowds dancing into the decade, two of the ballroom’s employees were rating each act on a storeroom door. For every Calloway to earn a four-star rating, an unknown band would leave the reviewers equally speechless – except for a short description best left on the door. 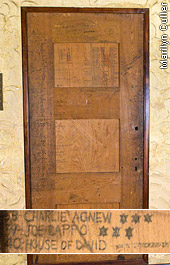 Today, the door is a valuable source for Professor of Music C. Matthew Balensuela, who is documenting the history of jazz in Indianapolis. The unsolicited reviews of two stagehands have helped him track down some of the lesser-known acts who never rose to national fame, but who still played a prominent role in the local jazz scene.

Alone, however, the door is an unfortunately incomplete picture. The Indiana Roof Ballroom was primarily a whites-only establishment. With the exception of the most popular band leaders of the day, its doors were closed to African-American musicians, many of whom performed on nearby Indiana Avenue.

During Winter Term 2011, Balensuela and a group of students interviewed musicians who know and lived the full story of jazz in Indianapolis. He says they turned to oral history as a means for collecting information because, unlike jazz centers such as Chicago and New Orleans, there are simply no other records.

“Oral history covers people who aren’t documented in any other way,” Balensuela says. “These are musicians who were literally never written about.”

The students also had an opportunity to relive the histories they were recording. During the night following their interviews, the guest musicians performed at the Fluttering Duck in The Inn at DePauw.

Balensuela’s first interest in music theory history predates jazz by a few centuries. After earning a B.M. in saxophone performance from the Juilliard School, he went on to study medieval music in graduate school. He is co-author of Music Theory from Boethius to Zarlino: A Bibliography and Guide, which won the 2009 Duckles Award from the Music Library Association.

Looking at a piece of medieval sheet music is a lot like looking at modern sheet music. The notation is slightly different – notes are squared instead of rounded – but familiar, and music moves steadily up and down the staff to accommodate a voice, the primary instrument of the age. Most of the medieval music that lives on in Balensuela’s iPod is liturgical, written on top of Gregorian chants that are older yet.

“In the medieval mind, beauty was an additive thing,” Balensuela explains. “You can never have too much, so it just gets piled on.”

The resulting sound is a collection of independently sung parts that, coincidentally, has a lot in common with improvisational jazz.

While at DePauw, Balensuela has also become involved in developing music history pedagogy. In 2010 he founded a way to document various teaching approaches at the Journal of Music History Pedagogy, the first journal devoted to pedagogy in the profession, where he is editor-in-chief.

His interest in pedagogy extends to teaching musicianship, as well. Music schools such as DePauw’s create unique teaching situations because students arrive already thinking of themselves as musicians. Musical talent, he says, is something that you can be born with, but there are also objective, methodical ways to be better for late bloomers.

"Sometimes I joke with my students that I felt like a failure for actually graduating with a degree from Juilliard," Balensuela says, "because it meant I did not get my career off the ground fast enough. DePauw has more of a training approach – more time and less pressure for a young musician to grow."