February 20, 2011, Greencastle, Ind. — Arthur E. "Bud" Klauser, a member of DePauw's Class of 1945 and longtime member of the University's Board of Trustees, died February 14 in Charleston, South Carolina, following a short illness.  A benefactor of the DePauw art collection and an international businessman with expert knowledge of Japan, Klauser was a Life Trustee of his alma mater at the time of his passing. He was 87 years old.

Arthur Ebbert Klauser was a native Midwesterner, born in Toledo, Ohio, on April 26, 1923. He moved with his family to Evanston, Illinois, where he attended grade and high school. He enrolled at DePauw in 1941 but entered the U.S. Army in May 1943 after his sophomore year and the Army sent him to the University of Chicago and then to the University of Michigan for Japanese language training. Following the U.S. occupation of Japan in 1945, Klauser was assigned as an interpreter at the war crimes trials. 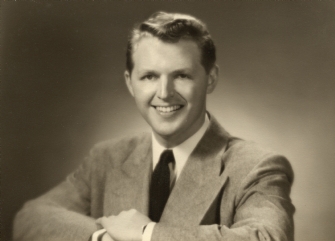 After completing his Army tour, Klauser earned an A.B. and M.A. from the University of Michigan and did further graduate work specializing in Japanese and Chinese history. In 1949, Klauser returned to Japan, this time for the Central Intelligence Agency.  He returned to the U.S. in 1955 to attend law school at Yale, where he received a J.D. in 1958.

With law degree in hand and extensive foreign experience already in his resume, Klauser then progressed to employment with a series of companies in posts around the world.  Klauser retired in 1992 from Mitsui Co. (USA) and in 1993 as director emeritus, Mitsui USA Foundation.

Klauser was an expert collector of Japanese art and artifacts, many of which he subsequently donated to DePauw University's art collection as the Arthur E. Klauser Asian and World Community Art Collection. Though he had not graduated from DePauw University because his service during

World War II, he was a loyal son of DePauw throughout his life, serving on the University's Board of Visitors from 1980 to 1983, and the Board of Trustees from 1983 until his death.

A memorial service for Bud Klauser will take place Friday, March 4, at 2 p.m. at the chapel at the Bishop Gadsden retirement community in Charleston, with a reception to follow.

An obituary is published in the Charleston Post  & Courier.