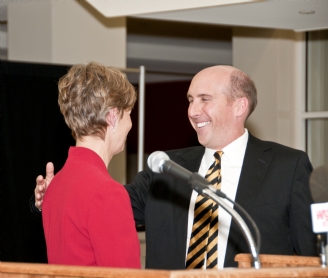 March 10, 2011, Greencastle, Ind. — The Stellar Communities grant Greencastle is receiving from the State of Indiana promises to bring "some special magic" to the city, Mayor Sue Murray says.  Murray and DePauw University President Brian W. Casey -- along with a standing-room-only crowd of more than 300 people from the community and campus -- welcomed Indiana Lieutenant Governor Becky Skillman today in a celebration of Greencastle's award, which was announced Monday.  The ceremony took place in the Great Hall of DePauw's Judson and Joyce Green Center for the Performing Arts. 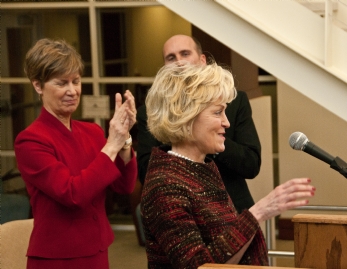 the news three days ago, Murray -- who worked closely with President Casey to craft and promote the winning proposal -- says,

[Download Video: "An Exciting Week" - 431kb] "We have been just absolutely ecstatic and proud and pleased and honored ever since, and we will be for the rest of our Greencastle days."

[Download Video: "Strong Partners" - 1108kb] "We are especially impressed by all of your strong partnerships, particularly between the City and DePauw University."  Her office says the State of Indiana expects to contribute at least $19 million to fund projects in Greencastle over the next three years. The community plans to:

"This all adds up to a very comprehensive plan that will indeed make the City of Greencastle stellar.  That's what it's all about," Skillman stated.

[Download Video: "A Great College Town" - 992kb] "In an era when we can work over the Internet and where we can telecommute, these livable, creative college towns are becoming the new communities of ideas and energy, music and art.  Lt. 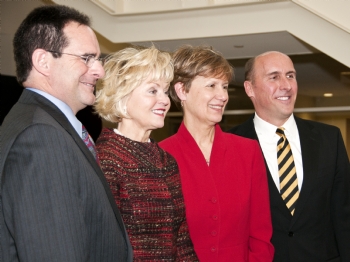 Governor, you have allowed us to imagine us to imagine the next great college town -- one for Indiana, one right here in Greencastle."

[Download Video: "DePauw & Greencastle" - 1632kb] "that's been consistent" and has "brought richness and breadth and a lot of opportunities to our community."  As the bridges between the campus and community are bolstered, she noted the

[Download Video: "Opportunities" - 1507kb] "incredible amount of offerings and opportunity on the DePauw campus that our community needs to learn to take better advantage of." She and Dr. Casey both recalled having a meeting on July 1, 2008, the day Casey began serving as DePauw's nineteenth president. Murray told the crowd that with the Stellar Community proposal, "What we have worked on is opportunities" to break down barriers -- physical and imagined -- between the campus and community.

According to President Casey, 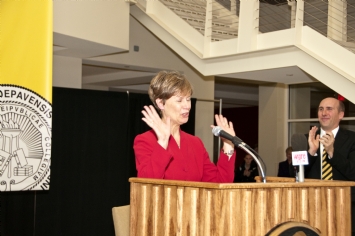 their backs on their hometowns -- they become self-referential, they think of their own thoughts, they become ivory towers, they form bubbles."  He asserted, "Today, Lt. Governor, you have taken this University -- one on the eve of the 175th anniversary of its founding -- and you have challenged us out of our bubble.  So this University, DePauw University, vows to start our next 175 years as a dynamic partner with Greencastle and with the State of Indiana."

The Stellar Communities program is a multi-agency partnership aimed at launching multiple community development projects in Indiana's smaller communities. The Indiana Housing and Community Development Authority, Indiana Office of Community and Rural Affairs, and Indiana Department of Transportation, along with the State Revolving Fund, are participating in this innovative program.

Skillman says its her hope that the program will "move the state forward one community at a time."  In the past, 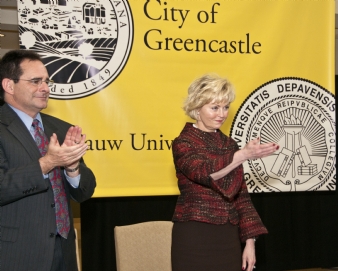 agencies would use a "piecemeal" approach to funding communities, paying for a single project at a time.  Using Stellar Communities grants, Indiana can now assist rural cities and towns which have developed strategic plan involving a number of projects which can now be implemented as a whole.

Mayor Murray believes the program "truly gives hope and optimism and an opportunity to small communities everywhere in this state."

[Download Video: "Promoting Progress" - 870kb] "We know that Greencastle now will become an even greater economic engine for the entire region.  We cannot wait to see what Greencastle will do for Indiana."