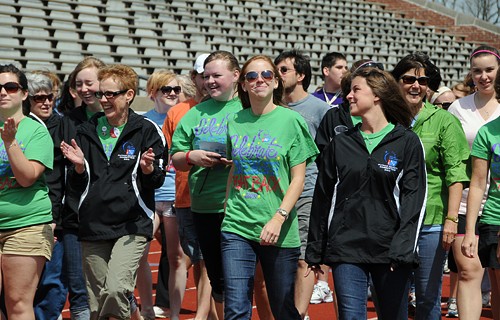 Valerie J. O’Hair remembers stopping in front of a candle-lit bag placed along the Blackstock Stadium track. Every year, countless luminaria wind around the track and bleachers at the Putnam County Relay for Life. From afar, they blend together into trails of light, but up close each is dedicated in honor or in memory of a person who has battled cancer. And this one had her name on it.

“It really touched my heart,” says O’Hair, now a grants coordinator for the University. “You just never think your name will be associated with cancer, or that you’d be able to say that you’re a survivor.” 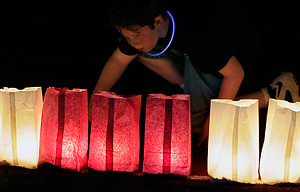 O’Hair walked the same track years earlier – not as a survivor, but in support of the cause. Then, in 1999, she was diagnosed with breast cancer. Tests showed that in terms of aggressiveness, her cancer was a “3 on a scale of 3.”

She and her doctors responded with equally aggressive treatment. O’Hair underwent two surgeries, months of chemotherapy and radiation treatments, and a regimen of medications that finally ended in July 2010.

“I never dreamed that so much time would go by and I’d still be here,” she admits.

In the time since O’Hair’s diagnosis, intensive research has led to major advances in the fight against cancer. O’Hair herself even took part in one medical trial, which removed 22 of her axillary lymph nodes. Today, as a result of the contribution of O’Hair and others, some breast cancer patients qualify for a less-invasive procedure requiring fewer lymph nodes to be removed.

“It feels good to be a part of some of that research, and the funding that comes in from events like Relay helps to make them possible,” O’Hair says. “Hopefully, one day there will be a cure so when somebody is diagnosed with cancer, it will be scary, but you won’t immediately feel like it’s a death sentence. The money raised at Relay for Life is very important, and I’m so grateful for it." 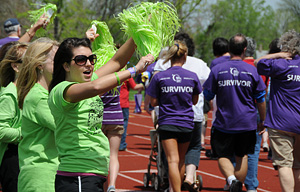 The Putnam County Relay for Life – known simply as Relay to many – is one of many similar fundraising efforts by the American Cancer Society (ACS) across the country, but it is anything butcommon. The event has become one of the most successful relays in ACS’s Great Lakes region, and no other Relay for Life in Indiana raises as much money per capita. In total, Putnam County’s Relay has raised nearly $2 million for cancer research. By the time the 2011 Relay came to a close at noon on May 1, another $126,000 had been collected.

Whether it’s a Greek house or a pizza parlor, nearly every local group or business is represented at Relay each year. Members of the participating teams walk the track, while others continue their fundraising efforts with games or crafts for the thousands of visitors who stream in and out during the weekend.

“It’s the biggest single event that brings Putnam County together, and the greatest bonding experience between the county and DePauw,” says community co-chair Richard “Dick” A. Shuck, director of business services at DePauw. 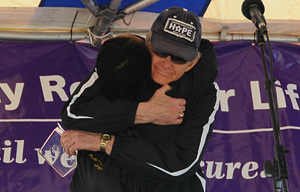 Shuck (right) has been a liaison between the University and community for Relay since 1996, when the event moved to DePauw’s campus. At the time, there were doubts about whether there was enough interest in the Putnam County Relay to continue it independently from others in the area. That soon changed.

“After the event moved to campus, it quickly became a rallying call for students,” Shuck remembers.

There is an unfortunate reality behind the rise of student support. Whether it has been a friend, family member or even personal battle with the disease, cancer is part of many of their lives. It is a thread that connects students of all backgrounds to each other, and to the Putnam County community.

“I feel like every person I know has been touched by cancer. It doesn’t matter if you’re 80 years old or a freshman in college, Relay is a reason for people to come together,” says junior Katherine E. Butler.

Butler has participated in Relay for Life events since she was a high school student in the Chicago suburbs. She served as this year’s ceremonies chair, in charge of Relay’s opening and closing ceremonies, as well as the luminaria ceremony (pictured below). Having been a part of other relays, she says there is definitely a difference. 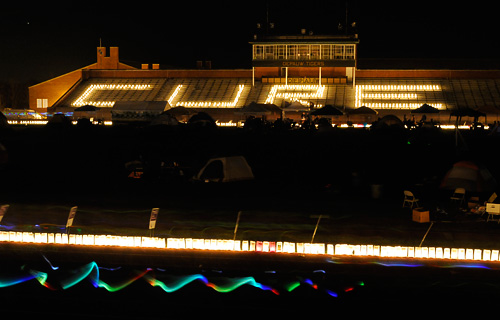 “This Relay for Life feels so much bigger,” Butler says. “Between the community and college students, we take it very seriously.”

Relay for Life adopted its 24-hour marathon format to remind participants that cancer never sleeps. Behind the scenes, neither do its organizers. The 2011 Relay doesn’t close until August, when this year’s fundraising officially ends and preparations for the next leg begin. The year-round effort requires a team of volunteers who are in it for the long term – who “get it,” as Shuck says. For the nearly 40 student leaders who take part in Relay, involvement usually begins as freshmen or sophomores and ends at graduation. 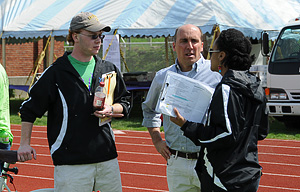 This year’s student co-chairs, Tyler A. Archer and Roddrea V. Smith, are both seniors, as is tradition. Archer (on left, with DePauw President Brian W. Casey and Smith) grew up in Greencastle and has long understood what the event means to the community. Smith, an Indianapolis native, had to learn on the job. Through years of dedication to the event, they have grown into leaders at the University and in the community. Now, with graduation so near and the end of their duties approaching, Archer and Smith will soon pass the baton.

“I don't think it's sunken in that we won't be involved in next year’s Relay,” Smith says. “I'm sure that I'll be excited for next years’ new co-chairs, although I'll miss the community immensely.”

More about this year's Relay for Life, including videos, can be found in this previous story. To get involved with Relay, or to donate to the 2011 Relay for Life, please visit the event's official website.