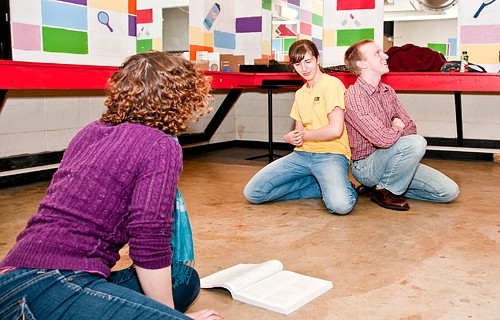 The semester-long program Will Power: Shakespeare in the Schools culminated with a special performance, “A Festival of Scenes from Shakespeare,” featuring students from DePauw, Greencastle Middle School and High School.

The program is the result of a 2010 Ball Brothers Foundation Venture Fund grant, which was awarded to DePauw for a campus start-up initiative intended to stimulate creativity and innovation as well as foster competition and collaboration among the state's 31 independent campuses.

Specifically, DePauw’s $15,000 grant supports a multi-year project to develop and implement Shakespeare in the Schools in Putnam County high schools – focusing on the works of William Shakespeare. 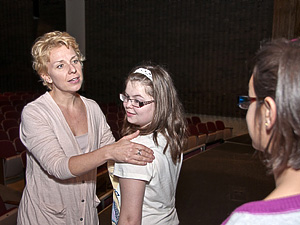 Amy Gaither-Hayes (right) adjunct professor of communication and theatre, is program director of the fesitval. She participated in four-week actor training session at Shakespeare & Company in Lenox, Mass., preparing for her role as program director. This spring she is teaching a course that prepares DePauw students to work with Greencastle students twice a week. “I lead them in exercises and warm-ups, talk about program philosophy, and together we plan the workshops at the high school,” she says.

“The DePauw students are so resourceful and open, and the younger students have really connected to them. Teaching Shakespeare can be daunting, but their attitudes are great. For a lot of DePauw students, this program is out of their comfort zone, but they have stepped up to the challenge,” Gaither-Hayes says.

DePauw senior Rebecca L. Janvrin says that it’s been a rewarding experience. “I am so proud of the middle school and high school students. I can really see the transformative power of Shakespeare. The students have made discoveries about Shakespeare and about themselves and are having so much fun doing it,” Janvrin says. “I’ve received a lot of positive feedback, and I'm so happy to be a part of it.”

The experience has been life-changing for Gaither-Hayes, who sees how the program affects the younger students. “We still feel all the same things that we’ve ever felt from the beginning of time. We have all the same emotions, problems and issues, which are either complicated or not, depending on what technology has been developed since then. However, we’re still human beings. There is still jealousy, heartache, love, being misunderstood by your parents – everything.

“The wide scope of human experience is still there, but we’ve lost language to deal with it. Kids don’t have anywhere to put these emotions. They’re texting. They don’t have language to express their feelings. Suddenly, Shakespeare is not over the top. The students come away saying, ‘This is how my dad talks to me, or this is what my boyfriend said to me, or this is how I feel at school.’

“Shakespeare questioned why we behave the way we do,” Gaither-Hayes says. “So, for kids who are going through all kinds of angst and flux, change and pain, and hilarity and mood swings, you give them this language, and they say, ‘Oh, I get this.’” 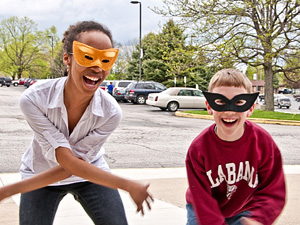 Greencastle High School student Hannah F. Gellman says, "It's been such a great experience to participate in this program. It's renewed my passion for theatre." Gellman is looking forward to the performance on Saturday. "I'm already feeling post-show depression though because I don't want it to be over."

This is the pilot year for the program, and Gaither-Hayes is excited to add another county high school next spring. “The kids don’t want to leave after the workshop is over. I overheard a couple students say, ‘I love Shakespeare. Don’t you love Shakespeare?’ When they practice their scenes, if they stumble over a word, they keep going. Shakespeare’s language is delicious to them. They’ve never tasted words like this before.”