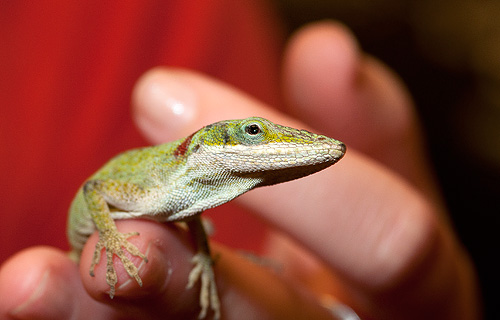 This summer, Associate Professor of Biology Kevin S. Kinney is sharing his immunology lab with two student research assistants – and about three-dozen lizards.

Kinney and his students, Alicia L. Whitney ’13 and Ethan L. Hindsley ’14, are beginning to uncover how the nervous and immune systems interact in reptiles. Despite volumes of research done on other species, reptile immunology is still a bit of a mystery.

“If you’re looking at anything without fur or feathers, there’s just not much information out there,” Kinney says. 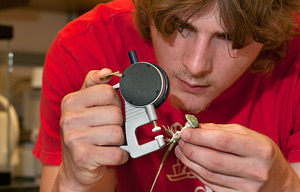 With the help of the tiny green anole, a lizard found in the southeastern United States, Kinney hopes to determine whether stress can affect immune function. Besides being readily available, the anole’s color-changing ability will provide additional stress markers for the researchers.

Kinney’s students begin the test by injecting a small amount of phytohemagglutinin (PHA), a plant extract and minor irritant, into the anole’s hind foot, and then measure the amount of swelling. (Above, Hindsley takes a measurement with a special caliper.) When they can establish a baseline for the swelling caused by the PHA, they will repeat the test with the addition of various environmental stressors – different temperatures and social situations, for example – to see whether or not these changes affect the amount of swelling and, therefore, immune function.

“If we can get these measurements, they'll tell us about how the neural and immune systems interact in the lizard,” Kinney says. “And there may be implications for animal well-being as well; different stressors may affect animals’ ability to resist disease, and this may be important for animals in captivity, or even in the wild.”

Kinney’s second experiment enlists desert iguanas – many times larger than the anoles – to shine a light on how reptiles induce a fever. (Below, a desert iguana patiently waits for its temperature to be taken.) 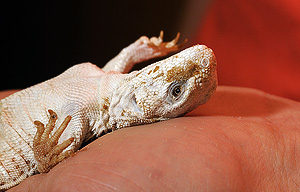 In humans, when the immune system detects an invader, a protein called interleukin-1 (IL-1) is released to the brain, spurring the body to increase its internal temperature. But ectothermic, “cold-blooded” creatures such as lizards rely on heat drawn from their environment. They raise their temperature in, evolutionarily speaking, the old-fashioned way: by finding a hot place to sit.

Something is clearly telling the lizard that it needs to get warmer, but what? Does a lizard’s immune system use IL-1 to send a warning to its brain, as in humans, or is there an entirely different pathway?

To find out, Kinney and his students are using lipopolysaccharide (LPS), found in the cell walls of bacteria, to trick a desert iguana's immune system into thinking it has been infected. The iguana reacts to the false alarm by raising their temperature with the help of a heat lamp.

Once Hindsley and Whitney have recorded the normal fever cycle of the iguanas – requiring midnight trips to the lab to track temperature changes – they will repeat the test with the IL-1 protein used by humans and other species. If the iguanas react in the same way, it would indicate that reptiles and mammals share a similar pathway between immune and nervous systems, even if we induce our fevers in different ways.

“If the pathway turns out to be the same as in mammals, it would imply that the whole system has been around for a long time, and that mammals have simply discovered a new way to elevate their body temperature,” Kinney explains. “If things are not the same, then, well, we have a new pathway to figure out.” 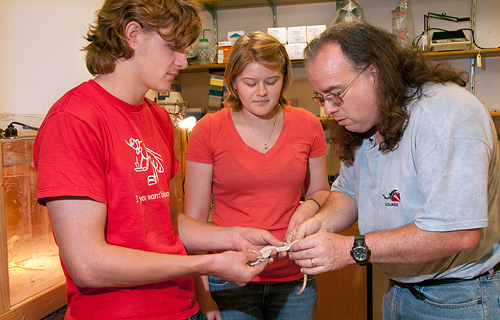 As strange as this research might appear to a non-scientist, it's just as unusual in the realm of biology. As far as Kinney knows, his project is only the third of its kind, adding to its complexity.

Because research on reptile immunology is so uncommon, finding appropriate testing materials is not always a matter of opening up a catalog. In the case of the desert iguanas, Kinney uses IL-1 derived from turkeys, the closest available option.

“If I were working with mice, I could have any of thousands of drugs to try, or probes to look for different chemicals or genes, or, for that matter, specially bred mice, sent to me by tomorrow,” Kinney says. “If I wanted to know how much PHA to inject into a mouse, a Google search would tell me in no time. For reptiles, I have to do a lot more digging. I have to improvise.”

And it isn’t always easy to maintain a controlled environment when working with live animals that squirm and jump as healthy lizards tend to do. One even briefly outsmarted the researchers by shedding its skin and, along with it, its lab identification mark. 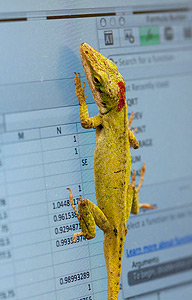 Luckily, Kinney’s students bring to the lab an extra set of brains as well as two pairs of hands. Whitney and Hindsley, both members of DePauw’s Science Research Fellows Program (SRF), have become skilled in the art of lizard wrangling. They even know many of their test subjects by appearance alone now, just in case one sheds its skin again.

“The lizards make working with them a little more entertaining since you never know exactly what's going to happen,” Hindsley says.

Whitney agrees. “They definitely keep you on your toes,” she says. “It's a lot of running around and attempting to get them to cooperate with us while we try to collect our data as quickly and accurately as possible.”

Of course, the two students are test subjects in their own right, working on their first intensive research project. Like the lizards, they too are stuck in a lab – albeit, air-conditioned – when they could be outside enjoying the sun. But if you ask them, this is exactly how they wanted to spend their summer break. Even with all the obstacles involved, the unknown has a special allure, whether you’re just beginning a career in science or well into one.

“We won't get close to discovering how all of this works this summer or anytime in the near future, but this is the beginning point,” Whitney says.

“The real fun for me comes from asking a completely different question,” Kinney adds. “And students are definitely more interested when they know they are doing something that hasn't been done many times – or ever – before.”