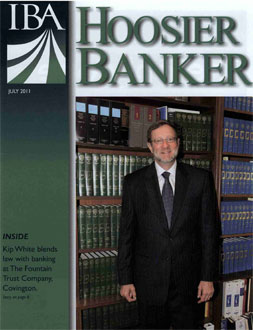 August 11, 2011, Greencastle, Ind. — "Instead of operating responsibilities, my primary duty is to create the right atmosphere for a productive bank," says Kip White, president and chief executive officer of the Fountain Trust Company in Covington, Indiana. A 1970 graduate of DePauw University, White is featured on the cover of Hoosier Banker magazine, a publication of the Indiana Bankers Association.

"It's important to have the right people fill the right jobs. In fact my observation is that it is better to fit the job to the person, as opposed to trying to fit the person to the job," White states. "My second role is to create an atmosphere in which people take responsibility. Inherent in that philosophy is the realization that, if people are going to take responsibility, they're going to make mistakes. Plus they're not going to do a job the same way that I would do it. There's got to be a willingness to accept mistakes and differences. Third, I need to ensure that I've chosen managers who allow people under them to take responsibility. We do not want to stifle initiative. When there is a micromanager who keeps a too-firm grip on everyone, staff cannot develop. Finally, I try to promote an atmosphere where we can have fun."

White, who also practices law with the firm of White & White, notes, "We have a four-generation family history of serving as both lawyers and bankers. My grandfather and father, who both served this bank as president, practiced law in addition to banking. I have always been both a banker and a lawyer, and now both of my sons -- who are involved in the bank -- are practicing law with me."

Established in 1903, the origins of the Fountain 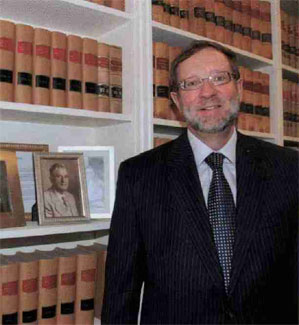 Trust Company are humorous. As White recalls, "Originally my grandfather and his wife started out as farmers. The family story is that, one day, my grandmother was slopping the hogs -- back in the day when women wore high-laced boots -- and spilled some hog slop down her boot. Allegedly she swore that it was the last hog she would ever slop, and the next day my grandfather enrolled in law school in Indianapolis. I probably owe a lot to that hog."

The story points out that White began serving on the bank's board as a senior in college. He also says, "When I was an undergraduate at DePauw University, before going to LU. School of Law, I spent a year of study in Manchester, England. I love living in rural Indiana, but I do appreciate the different perspectives to be gained from travel."

Learn more about Hoosier Banker at the IBA's website.