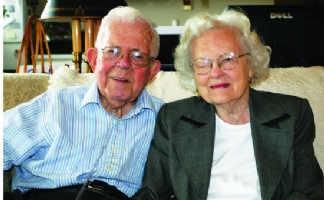 October 2, 2011, Greencastle, Ind. — "I wanted to write the story because it would encourage people in lonely situations," says Vera May Kierstead-Farber of the new book, Youth to Golden Age. "It's kind of an unusual story," adds the 1936 DePauw University graduate, who co-authored the work with her husband, Bob Farber '35. They are featured in Greencastle's Banner-Graphic.

"The book covers the incredible love story between two best friends who have known each other for nearly 71 years," writes Lauren Boucher. "The book begins with Vera May, newly graduated from DePauw University, deciding where her life will lead and the beginning of a lifelong friendship, with her now-husband, Bob. The two met after graduation and quickly progressed to a friendship. From there the two decided marriage wasn't an option, as both wanted to further their careers before settling down. After several years of separation, the two both ended up marrying different people. But both still kept in touch over the years."

Robert H. Farber, vice president emeritus and professor emeritus of education at DePauw, tells the newspaper, "We both married somebody else. But, we never gave up our friendship."

Boucher reports, "Shortly after both spouses passed away, the two old friends would run into each other at community events around Greencastle and Putnam County. After 71 years of friendship, Vera May and Bob decided to marry in June 1998. 'I just kept bumping into him,' Vera May said. 'I never even thought we would get married. It was just something that happened.' " (at right: Jane Pauley greets Robert Farber '35, vice president emeritus of DePauw and his wife, Vera Kierstead-Farber '36, after Pauley's April 17, 2009 Ubben Lecture at DePauw)

The Farbers have been married nearly 14 years, and Vera May Kierstead-Farber has spent nearly five years on the book, which is her fourth.  The couple will host a book signing Friday at Asbury Towers Retirement Community, with another October 20 at the Putnam County Public Library.

You'll find details and the full story at the Banner-Graphic's website.