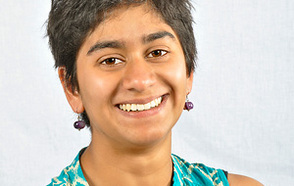 When former president Bill Clinton came to campus to give the 25th Anniversary Timothy and Sharon Ubben Lecture in November, he probably didn’t recall that a DePauw student had drafted briefs for him earlier in the year. Although entirely by chance, his visit was the second time their paths had crossed in only a few months.

Considering senior Aishwarya Subbaraman’s direction, it might not be the last.

Living 7,500 miles from her family in Muscat, Oman, Subbaraman has certainly taken advantage of her time at DePauw. In addition to being a Management Fellow and member of the Information Technology Associates Program (ITAP), the economics major is finishing her Honor Scholar thesis about the economics of rare earth extraction policy.

With applications in defense and green energy, rare earth minerals are crucial to most high-tech industries . Luckily for China, it controls 97 percent of the world’s supply.

“China holds a monopoly of these rare earth elements, but they’ve decided to reduce their exports significantly,” Subbaraman says. “My project is an economic analysis of the problem. I’m looking at how much and how quickly China should extract its rare earth elements, and the political factors that might move them away from what would be their optimum output.”

In spring 2011, Subbaraman put her interest in economic policy to use while interning at the Clinton Global Initiative (CGI) in New York City. Founded in 2005, CGI oversees economic and human development projects called “commitments” around the globe. These commitments bring communities, corporations and nongovernmental organizations together to solve the world’s most pressing problems.

"A private firm from the communications industry, for example, might be interested in making a commitment, but not know what to do or where to start,” Subbaraman explains. “CGI can give them an idea of what their competitors have done, or of ongoing projects suitable for them to partner with."

Subbaraman started as a member of the CGI’s administrative team, drafting internal communications and arranging interviews for other internships and jobs. It was the makings of a good, if not especially glamorous, introduction to the day-to-day operations of a prominent organization. But as the weeks went on, Subbaraman became more and more involved with CGI’s global work.

Her time at CGI coincided with its annual commitments reporting cycle, during which members report back on the progress of their projects. As the reports piled up, her economics background became especially valuable. Subbaraman was soon analyzing commitment reports, making sure the numbers added up, taking notes of successes and failures, and drafting briefs for Clinton himself.

As with all good internships, Subbaraman left having learned as much about her own aspirations as she did about CGI’s inner workings. Rather than acting as a mediator, she says she wants to be at least one degree closer to the problems CGI helps to solve.

“CGI is a facilitator, not necessarily a creator, of solutions,” she says. “It says, ‘Okay, you’ve got an issue in mind. Now let's see how we can get an expert involved.’ I'd like to claim to be that expert. Whether in academia or in a think tank, I want to be doing really hard, empirical research. And hopefully I’ll be able to put it into practice.”