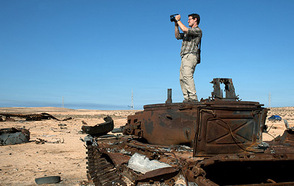 Benjamin "Ben" C. Solomon ’10 has been working among Pulitzer Prize-winning journalists in the Middle East, freelancing for The New York Times as a foreign correspondent and quickly making his mark in a fairly new field – video journalism. (Solomon at right. Photo by Tyler Hicks.)

He credits his experience as a Media Fellow and staff member at the student newspaper The DePauw, both of which gave him the skills he used to land an internship at one of the most prestigious newspapers in the world.

A communication major and studio art minor, Solomon says it was his final project for the Media Fellows Program – a 15-minute documentary about the Posse Program at DePauw – that clinched the internship following graduation.

He’s currently based in Cairo, Egypt, working on a large investigative multimedia project for The New York Times about the war in Libya, where he spent last month driving across the country – his third visit there. He also started a long-term documentary project about the youth and how they influenced and continue to change Middle Eastern politics and culture. Additionally, he’s engaged in daily assignments concerning the election and violence in Tahrir Square.

The assignment that helped launch his career, however, was the one he instigated by sheer determination and perseverance. He was working for The New York Times on TimesCast, which is a daily news video. “I had been begging my editors to let me out and send me somewhere,” Solomon says. “For eight months, I worked hard and did a good job, and after a while they agreed.” It was a trip planned for last August with The New York Times columnist Nicholas D. Kristof, who frequently works in the Middle East.

“We had planned a month in advance to go to Libya, where we were going to stay in the east – in the safer area. We were planning to make a basic video, and I was just happy to do it. The week before I was supposed to leave, the rebels reached the outskirts of Zawiya, a city right outside of Tripoli. This was the turning point. It was checkmate. As soon as that happened, I went to my editors and said I have an open ticket. I can go whenever I want. Can I just go? Can I go to Tripoli? 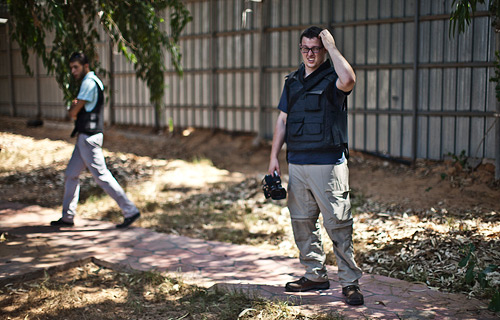 “They weren’t very comfortable sending me to the war zone alone, but thankfully they did. I left a week earlier than I had originally planned. We got there two days after the fall of the Gaddafi forces. It was a mess. The rebels are a very inexperienced army, and it was very clear that they did not have control over the city. Driving into Tripoli was an eight-hour trip from the Dehiba border. For eight hours, the drive was through the most beautiful country, but the last 45 minutes were undoubtedly the scariest time of my life.”

Solomon was traveling with reporter Anthony Shadid, the Beirut bureau chief for The New York Times. The last time Shadid was in Libya, he was kidnapped. He was one of four Times journalists covering the fighting in eastern Libya last March who were reported missing.

“For the first few days, we were very safe with our drivers and wore full body armor because there was risk of snipers. After four days, the fighting quelled, and the rebels pushed the forces out of town, so it was really safe to move around. The projects turned into reaction stories – what the damage has been, how many casualties, once modern city is now torn to pieces. It was pretty interesting.

“I ended up doing five or six videos, and they all varied in subject matter. It was really a terrific career jump because not only did I do some work independently, but also I worked with three writers and three photographers from The New York Times and among them, three were Pulitzer Prize winners – guys who had fantastic experience as foreign correspondents. I was just trekking along with them, but I worked hard and produced a lot of good videos that I’m really pleased with now.

“The video I did on my own is the one I enjoyed most. It’s about the inside of the palaces of Gaddafi’s sons. They had been abandoned and looted. I talked to some rebels and got to see their reactions to these palaces that they lived next to for 20 or 30 years. Now these men are just walking around because they were never allowed in before. They were rummaging through things – looking at the sandals Gaddafi’s sons wore, the Johnnie Walker Black they drank, and random things like that. They were flabbergasted by the amount of money the sons had and the luxuries they lived in.”

Solomon and Kristof produced three videos together. One focused on a naval commander who defected from the Gaddafi forces and joined the rebels. He was abducted by the Gaddafi forces and held for a week. Everyone was sure he was going to be tortured and executed. After he was freed, he was put in charge of one of the military operations in Tajura, just outside of Tripoli. Solomon says, “It was an uplifting story about this guy who faced death and was freed by the rebels.

“I continue to be interested in conflict and war. It’s something that is truly the most frustrating and most interesting thing I’ve ever faced. It’s war, but it’s human.”

Solomon hopes to keep covering war and acknowledges he’s fortunate to be where he is. “I’m in a very specialized position that’s underdeveloped. I produce videos for a newspaper. Five years ago, this position didn’t exist. My sense of the media is that it’s struggling, but I’m in a lucky position to be where I am.

“My time at DePauw allowed me to do some really interesting things. It’s been an easy transition for me. DePauw is an amazing place. If you’re motivated to do things, the opportunities are limitless.”