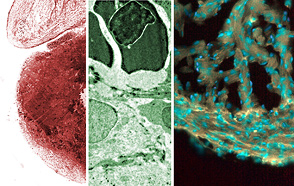 Six DePauw students who worked in Assistant Professor of Biology Pascal Lafontant’s heart regeneration lab contributed to a recently published study. Appearing in the February 2012 issue of the Anatomical Record, their research used the giant danio fish as a model of cardiac regeneration.

In the article, Lafontant and his students describe inflammation, collagen deposition and tissue remodeling in the hearts of the small fish. In humans, these processes occur following heart attacks, leading to scarring of the heart muscle that weakens it significantly. In the giant danio, however, the researchers demonstrate that the heart of the three-inch fish can regenerate even in the presence of these limiting processes. Lafontant believes that by understanding the regeneration process in the giant danio, researchers may be able to reduce the threat of heart disease in humans.

“Heart disease is the number one cause of death in the United States,” Lafontant explains. “According to the Centers for Disease Control, nearly 750,000 Americans have a heart attack every year, and the cost of caring for heart disease patients topped $300 billion in 2010.

“The Holy Grail of cardiovascular research is to replace tissue damaged by a heart attack with new functional tissue. Scientists study heart attacks and heart failure using different animals such as mice and zebrafish. We thought that the giant danio, which has been used as a model of skeletal growth, could be a good model for heart attack and regeneration. We are interested in finding out how the fish achieve this remarkable feat in the hope that someday we can apply this knowledge toward potential intervention in humans.”

Das (below, with Lafontant) won an award for his role in the research in the American Association of Anatomists' Undergraduate Poster Competition at Experimental Biology 2011. He was invited to travel to Washington, D.C., by the association last August to discuss how to increase undergraduate students’ participation in research.  An essay reflecting his experience doing research at DePauw appeared in the American Association of Anatomists News in December. 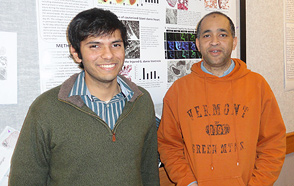 “It is quite unusual to have undergraduate students as co-authors in a publication,” Lafontant says. “However, being at a small liberal arts institution is highly beneficial to students because many faculty members depend on undergraduates to conduct research. The students receive excellent training, and they get to be trusted in conducting crucial and significant portions of the investigations. Students in the lab are generally excited and committed to what they see as important work. They get to travel to major conferences to present parts of the work, and they realize that many things that are worthwhile to pursue take time, so they persevere.”

Because the research and publication process can take many years, it’s rare for a single student to see a project through to its completion. However, the turnover gives more students a chance to participate in the research, and Lafontant says that graduates of his lab have a clearer picture of where to go next.

“It’s very rewarding to see students grow in confidence at being able to do original research, at being able to ask pertinent questions and designing and carrying out experiments,” he adds. “This confidence seems to allow them to envision success at the next level.”

Read an abstract of the article in the Anatomical Record...