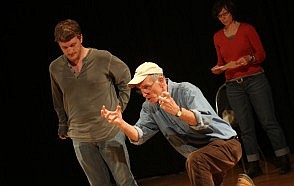 The second annual Spring Spectacle of Shakespeare at DePauw University is scheduled on Saturday, May 12 in Moore Theatre of the Judson and Joyce Green Center for the Performing Arts. The Festival is a 12-week collaboration between Shakespeare & Company in Lennox, Mass., DePauw and three participating middle and high schools in Putnam County. The program is free and open to all.

Gaither-Hayes is teaching a DePauw course to prepare 10 students to work in the community schools. The DePauw students meet three times a week on campus and then break into groups and go into the three participating schools. The course is repeatable for credit so that students are able to participate each year and build on what they learned the previous year.

“This approach to teaching Shakespeare changes everything,” Coleman explains. “Reading and discussing your interpretation of his works in class have a very short shelf life. When you do Shakespeare and actually get serious about treating a play as if it were a play and treating a script as a script, it tends to stay with you for the rest of your life. When you do these parts, when you say these words, think these thoughts and feel these feelings, you embody them and move around on stage, and then it becomes a part of who you are,” Coleman says. “It’s not just something you remember. 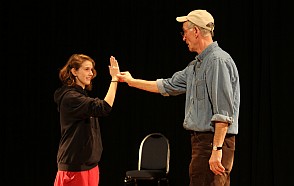 “Shakespeare is giving words to such deep fundamental human experiences,” he explains. “These young students are in the throes of adolescence – experiencing a whole gamut of emotions – betrayal, love, hurt, happiness and hopelessness. Most of these kids have no adequate language to put words to these emotions or to express what’s going on with them.”

The Spring Spectacle of Shakespeare at DePauw is modeled after the Fall Festival, which Coleman founded more than two decades ago. He wanted to take the performance and discovery aspects of the plays and bring them into the schools when kids were reading Shakespeare for the first time and not liking it.

“That’s how 24 years ago – by trial and error – this developed into a whole methodology and ethic and aesthetic, and it’s not taking the professional model and imposing it on a school,” Coleman explains. “The Festival is such a perfect example of giving kids the experience of the art form that is theatre. It’s inclusive. So, of course, we can have five Lady Macbeths and five Macbeths, and three of them can be girls.”

The Fall Festival has been replicated at schools across the country. Shakespeare & Company trains teaching artists who are actors and directors to then go into high schools and direct plays. DePauw’s program is modeled on the same idea except Gaither-Hayes is training DePauw students to do the same thing. Some of the students are artists, and some have no experience with Shakespeare, acting or teaching – but they do have an interest in working with younger students and theatre.

Coleman continues to see the transformation in students. “They love it once they start doing it,” he says. “Every student in the class has talents that are needed to make a play happen. When you deal with Shakespeare as a script, a play or a story to be told out loud to witnesses, the complexity just increases – not arithmetically, but geometrically.

“Twenty years from now, the kids’ understanding of a Shakespeare play is going to be richer. In 40 years, richer still. For right now, they may not have it all, but they have it. Let them tell the story, and they’ll remember it the rest of their lives.”