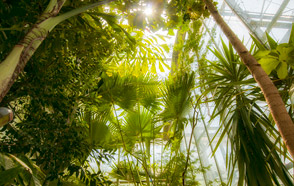 Students often pass by the F.W. Olin Biological Sciences Building without knowing about the tiny paradise it contains.  Camouflaged by tall transparent walls with plants on either side, the Olin greenhouse gives those who stumble upon it a quick escape from the familiar.  Visitors are welcome to walk in and take a tour.

Inside, greenhouse manager John Eskew tends to the needs of dozens of plant species collected there over the years. Throughout the week, he cares for and monitors each plant. Some are higher maintenance than others, requiring manual pollination, while others just need a sip of water from time to time. 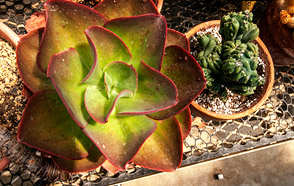 Though all beneath one roof, a computer-controlled climate system divides the greenhouse into sections for desert, temperate and tropical species, making the short walk between each feel like you’ve traveled a lot farther. It’s a convenient way for students to interact with plants from around the world without ever having to leave campus.

Eskew’s encyclopedic knowledge of his wards is evident in the lushness of everything visitors see in the greenhouse. Rather than using harsh pesticides, he prefers soaps and a managed population of helpful insects such as praying mantises, keeping plants safe to handle or even taste.

“The species all have different uses, origins, shapes, sizes and smells,” says Associate Professor of Biology Dana A. Dudle. “That’s valuable because most students come to DePauw not knowing much about plants, and they are not necessarily intrinsically excited about plants.

“But when they come to the greenhouse, because they can touch something or put it in their mouth, it’s much easier to get excited. You start thinking about interesting questions. Why is this thing smooth and shiny and that thing soft? Why does that plant smell horrible, and this one smells like Froot Loops?” 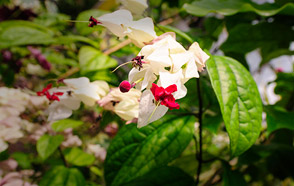 The latter, a thorny citrus tree that really does smell like Froot Loops cereal, is a hit among school children who visit as part of a science outreach program. Dudle says that as children grow older, they tend to lose interest in plants, but the program keeps them curious by being hands-on and encouraging exploration.

“They want to touch everything, Dudle says. “They love the colors; they love the textures. They love getting their hands dirty.”

Though bugs and botanists are equally as likely to be found crawling over the different plants, the greenhouse attracts visitors from other parts of the University as well.

“The greenhouse has been used a hundred different ways in the years I’ve been here, and it always is great when things are going sour outside,” Professor of Art and Art History Robert D. Kingsley says.

He and Assistant Professor of Art and Art History John G. Berry use the greenhouse to teach drawing students of all levels. At first, students focus on perspective and dimensionality in their drawings, but Kingsley challenges his advanced classes to create abstracted images that referencing a plant rather than copying it. As students become more familiar with plants as a subject matter, they begin to notice more about their features and interpret them in different ways. 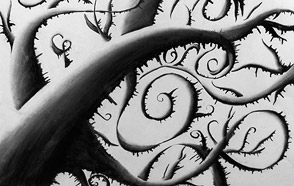 “The longer they work with a subject like plants, the more important it is they know what they’re drawing,” Kingsley says. “They start to get interested in what differentiates plants and think about how that manifests itself in their imagery.”

Olin and its greenhouse were built in 1993, replacing an older greenhouse that stood behind Harrison Hall. At the time, the largest member of the collection was a cycad, a prehistoric plant that looks like a misshapen palm tree but is actually more closely related to other cone-producing gymnosperms, such as spruce or pine trees. Though its size made transplanting the cycad more difficult than a potted plant, its smallest features presented the greatest challenge.

“With any plant, when you dig something up, you are cutting through some portion of its root mass,” Associate Professor of Biology Bruce S. Serlin says. “What are really critical for the plant aren’t the big root structures that you see, but the little fine ends that supply the plant with water. You could probably fit 100 of them on the width of your little finger. When you cut through them, them the plant has no mechanism for bringing up water for a period of time, and there’s no way to give it an I.V.” 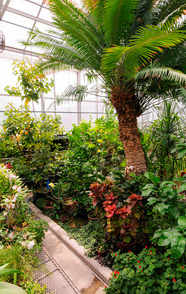 The cycad (right) survived the move and now stands in the center of the Olin greenhouse. Serlin doesn’t know the exact age or origin of the plant, but he believes that it is between 75 and 100 years old, making it the oldest member of the current collection – and perhaps the entire biology department.

Even stretching above everything else, the cycad can be easy to miss with all the attractions at eye level. There are plants that recoil at your touch, carnivorous plants that turn the tables on careless animals, and at least one plant you couldn't ignore if you tried.

The greenhouse's voodoo lily, a gift from an alumnus, attracts insects for pollination like many other plants do. But each plant appeals to a different kind of insect or animal, and the voodoo lily appeals to carrion flies. To do so, its flower produces a smell similar to rotting meat that can fill the entire greenhouse.

“When the voodoo lily starts to bloom, the greenhouse becomes an interesting place to be,” Serlin says. “We typically have to move it onto the back dock for a while.” 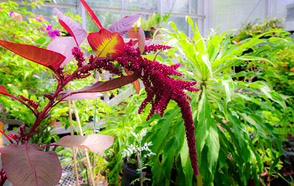 Bad smells are an otherwise uncommon feature among the plants and trees that bloom in the greenhouse. Serlin, who taught a class about plants and health during spring semester, says the kinds of plants growing there tend to draw students in rather than chase them out.

“You’ll tell a class to go to the greenhouse to take care of something, and, at first, they’ll only go once a day to water their own plant,” he says. “Then, after awhile, you find them just wandering around in there, looking at other species. Maintaining the collection the way we have has been helpful for that, and I think it’s fun to watch as students gain an appreciation.”