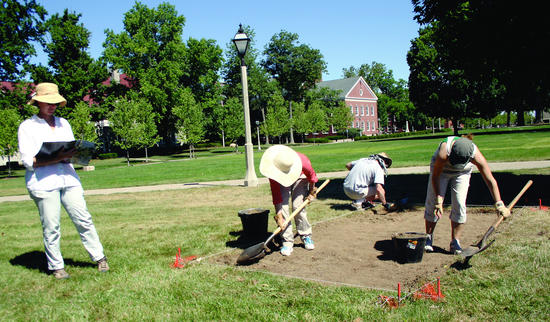 "Without an Indiana Jones fur fedora anywhere in sight, sunbonnets, caps and floppy hats had to suffice this week as an archaeological dig commenced on the DePauw University campus," writes Eric Bernsee in today's Banner-Graphic. An article details efforts now under way "to excavate the site of the old Minshall Lab building. Minshall had stood west of the Union Building along the north side of Hanna Street from 1902 until it was razed in 1973 with the opening of the Julian Science and Math Center a stone's throw to the southwest." (photo, l,r: Professors  Rebecca Schindler and Pedar Foss work with student volunteers Kat Raymond-Judy and Danica Andersen)

The report continues, "The three-week excavation looms significantly this year as the creation of an historic map of the DePauw campus has become a byproduct of the university's 175th anniversary celebration. Heading the dig is 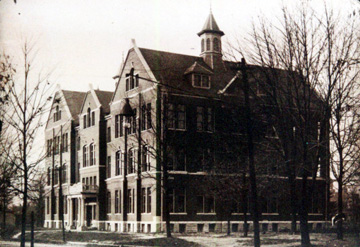 Rebecca Schindler, an associate professor who chairs Classical Studies at DPU, joined by Pedar Foss, associate professor of Classical Studies and dean of academic life at the university. Digging in the dirt beneath the shadows of East College is a first for both of the classical archaeologists. Neither has ever done a dig on American soil, let alone in Greencastle and at DePauw. Yet it represents a remarkable opportunity, Schindler notes, reminding all that the site uniquely has been part of a college campus since 1837."

Read more about the effort at the Banner-Graphic's website.

For regular student updates on the project, click here.