Colin Doran '11 is Graduate Assistant Football Coach at Concord U 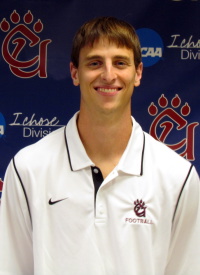 Colin Doran, a 2011 graduate of DePauw University, has joined Concord University's football program as a graduate assistant coach. He rejoins former Tiger offensive coordinator Dustin Ward, who has the same position at Concord.

"Colin came highly-recommended from Dustin Ward," says Concord's head coach, Garin Justice. "Colin had an outstanding career at DePauw both on the field and in the classroom."

A communication major and wide receiver at DePauw, Doran was a part of conference championship teams in 2009 and 2010 and "his senior class recorded the most wins in a four-year period in school history," notes Concord's announcement. "Academically, Doran was