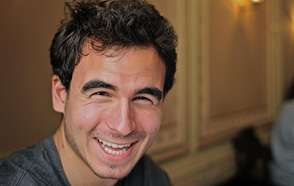 Alex Thompson ’12 cried when he read the email.

Then he got to work. The news meant his script was one step closer to being produced, but what had been a side project was now the film that could launch his career. That’s just the way it works when you have Olympia Dukakis on board.

Less than a year earlier, while Thompson, an English writing major, was studying abroad in Prague, a film professor had rhetorically asked of a script he’d written, “Can a horse with no spine walk?” It was bitter criticism for a young man who’d spent his life making movies and had no intention of quitting.

On the return flight, Thompson wrote a new script – something with a spine and a heart and all the other vital parts because it came from real people. His Greek-American grandmother, Marie – Yiayia, as he knows her – loves to talk with her friend, Irene, and Thompson loves to listen. Having grown up with them, he knows their routine almost as well as they do.

“My grandmother and her friend have a very specific voice,” Thompson says. “They're constantly telling stories and reflecting on their lives as actively as I do, if not more. I know my grandma's stories as if they are myths.”

Thompson planned to shoot his script, Irene & Marie, with friends who either needed the credit or enjoyed the novelty of being in a film. For the role of Marie, he turned to Yiayia herself. She said no. She wasn’t an actor, she argued, and she’d lose all her friends if they found out, anyway.

So, Thompson began looking for others who fit the part. He’d found work after graduation as a casting director’s assistant at Matthew Lessall Casting in Los Angeles, granting him a peek at most of Hollywood’s unlisted numbers. Of all the possible Maries he reached out to, Dukakis was the longest of long shots. Thompson sent the script to her manager, Gene Parseghian, thinking a daughter of Greek immigrants would get it. Sure, admitted Thompson’s friend and prospective producer, but would her manager?

Parseghian’s eventual reply changed the course of the project – and raised the stakes higher than ever. With Dukakis depicting her on the big screen, Yiayia was now convinced she’d need to find new friends. And now that Thompson had an Academy Award-winning actress lined up for his film, so would he.

“I cried at my desk when I got the email from Gene, but the first thing I did was craft emails for producers and other actors, supporters and friends,” Thompson says. “I never stopped emailing.”

Everything started to come together as if the film was always meant to be. Actress Rose Gregorio, whom Dukakis had recommended for the role of Irene, agreed to round out the leads. Then Greg Pappas, founder and chairman of the Greek America Foundation pledged his organization’s support for the film. Roberta Munroe, author of How Not to Make a Short Film, joined on as producer. The only thing left to do was to shoot it. 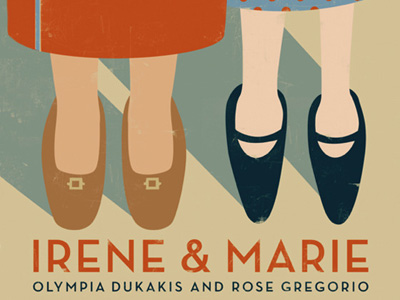 To meet his estimated $50,000 budget, Thompson turned to Kickstarter, a crowd-funding website that has exploded with success stories. Since people who back Kickstarter projects aren’t buying a finished product, most projects offer perks for different pledge levels – familiar to anybody who listens to NPR. Pledge $10 to Irene & Marie, for example, and a candle lit in your honor will be featured in the film’s opening scene. Investors at the highest tier get a role as an extra.

“I had ideas about folks meeting Olympia or being in the film, but because I'm new to things I didn't want to invoke anything completely unprofessional,” Thompson says. “Luckily, Greg [Pappas] was all about the perks, and he and Roberta Munroe really helped maximize the potential. What stands out to me is the $500 ticket to the premiere. I'll get to shake the hand of the biggest investors – really fun stuff for a young whippersnapper like myself.”

If Thompson can keep his project on track, those handshakes will happen at a Hollywood premiere next May. He’s already working on new scripts for when that moment comes, for when people are coming to him for work. He needed a little luck and a lot of help to make it this far. Next time, he hopes talent alone will be enough.

“That's why this is so miraculous,” he says. “I'm not breaking my back trying to make a quality film with my friends. I'm working with professionals who have me at every turn. All I need is a solid shot list.”

Visit the Irene & Marie project on Kickstarter to pledge your support. All pledges are tax-deductible through the Greek America Foundation.