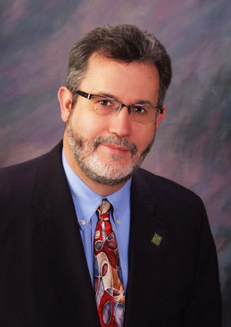 "A formal inauguration ceremony was recently held for Wilmington College’s 18th president, James M. Reynolds, but on a daily basis at the Quaker institution, Reynolds is known to everyone as just 'Jim,' " begins a feature published in Ohio's Springfield News-Sun. Reynolds, who earned a master's degree in zoology from DePauw University in 1981, "does not use a formal title, does not have a specially-marked parking space and is 'no more noble than the next person' -- reflections of Wilmington College’s foundational Quaker values, he said. After a little more than a year leading the college, Reynolds is preparing to launch new programs and begin a public fund raising campaign for campus improvements."

The 55-year-old Reynolds has been at Wilmington since 2007, when he was brought in as as vice president for academic affairs and dean of the faculty.  He was named the college's eighteenth president in February 2012 and was formally inaugurated on March 22 of this year.

As president, "I get to do a lot of inspirational things,” Dr. Reynolds tells the newspaper. "I tell everybody I’ve got the best seat in the house."